UPDATE: Australia's No.3-ranked player Marinko Matosevic has won a thrilling match over Frenchman Julien Benneteau on Monday in the first round of the Brisbane International. 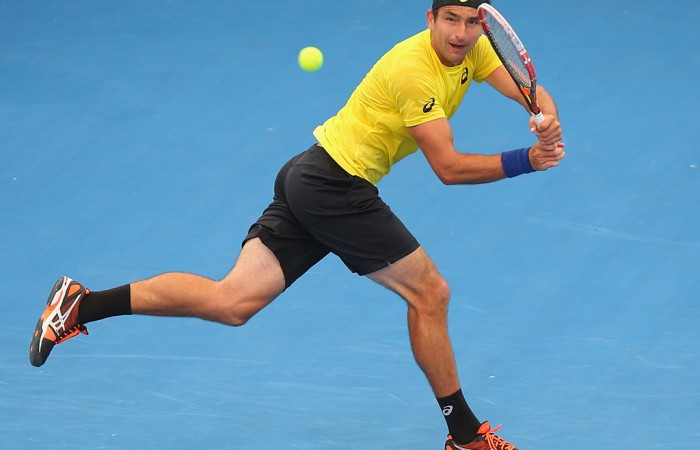 Just over a month ago, Australian veteran Marinko Matosevic could barely lift a fork.

On Monday, the world No.61 pulled off a courageous three-sets victory against Frenchman Julien Benneteau in a thrilling first-round clash at the Brisbane International tennis tournament.

Matosevic’s 5-7 6-4 7-6(4) victory at Pat Rafter Arena was his first triumph in the main draw of a top-tier event in his home country in his 10th attempt.

And it came just weeks after a shoulder injury disrupted the tailend of his “horrible” 2013 season.

The 28-year-old Victorian suffered the injury at the China Open – not long after beating, coincidentally, Benneteau, in Beijing.

He pulled out of the Austrian Open and then missed a tournament in Shanghai.

“I flew to Europe to keep trying to play, but I couldn’t,” he said on Monday.

“It hurt to pick up a fork.

“Then I took five weeks off from tennis and I came back and tried to play and it hurt after four days. It was pretty serious.”

Matosevic was reluctant to talk about his treatment for the “serious but not crazy serious” injury, preferring to “keep it under wraps”.

But it’s crystal-clear he’s back to full health and primed to break his grand slam duck after 11 losses in majors.

Matosevic, who reached a career-high world ranking of No.39 in February, said he felt relieved to get the monkey off his back by posting his first main-draw victory in Australia in a match lasting two hours, 41 minutes.

“The main thing is the relief,” said Australia’s third-ranked player behind Bernard Tomic and Lleyton Hewitt.

“I felt like I should have won in straight sets. Then I almost blew it in the third and I held on. So yeah, very happy to win.

“It’s been a horrible year. I just wanted this year to finish. But then I finished it off with a good win I guess.”

Hewitt takes on 17-year-old qualifier Thanasi Kokkinakis on Tuesday night in one of two all-Australian clashes on centre court.