After a succession of early-season disappointments, world No.18 Sam Stosur is banking on a proven formula at the Hopman Cup in a bid to break her Australian Open hoodoo. 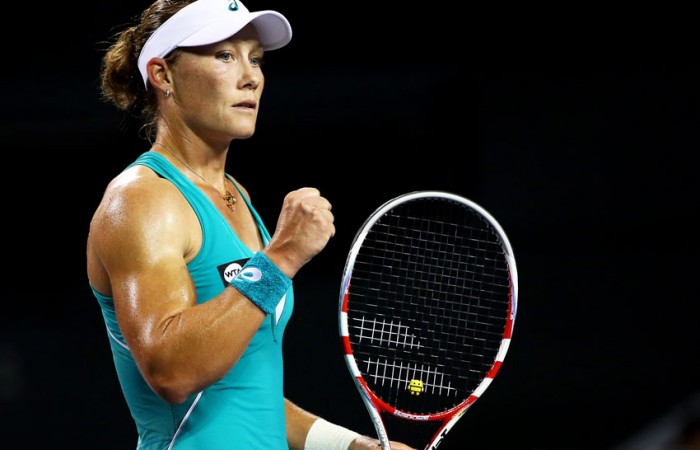 After a succession of early-season disappointments, world No.18 Sam Stosur is banking on a proven formula in a bid to break her Australian Open hoodoo.

Stosur is yet to live up to her potential at the Australian Open, with the 2011 US Open champion failing to make it past the second round at Melbourne Park in her past two attempts.

In each of those years, she started her summer at Perth’s Hopman Cup, where the guarantee of three singles and three doubles matches helped Stosur regain her touch after an off-season break.

Stosur is opting for the same approach this summer, with the 29-year-old to take on world No.5 Agnieszka Radwanska, rising Canadian star Eugenie Bouchard (32), and Italian Flavia Pennetta (31) before moving on to the Hobart International.

“Those three matches are going to be really important for me. Win or lose, it’s all about time on court, and finding your feet again and being used to those match conditions,” Stosur said ahead of Australia’s showdown with Canada on Saturday night.

“I haven’t been able to get that the last couple of years in Brisbane unfortunately, but this time in Perth hopefully it will all turn around.

“The Australian Open is a tournament where I haven’t been able to play my best yet. But if I play to a standard I am happy with, I should get through a few matches. And then from there you never know.”

Overall, 2013 was a slightly disappointing year for Stosur.

But the 29-year-old finished the year brightly with a title win in Japan and finals appearances in Moscow and Sofia.

Stosur, who will team with Bernard Tomic at Hopman Cup XVI, has set her sights on breaking back into the world’s top 10 in 2014.

“I didn’t do well in the Grand Slams and a few of those other major events,” said Stosur, who appointed Miles Maclagan as her new coach last month.

“So if I can pick up my form in those events then I think I can get back to where I can want to get.”

Australia hasn’t won the Hopman Cup since Mark Philippoussis and Jelena Dokic broke through in 1999.