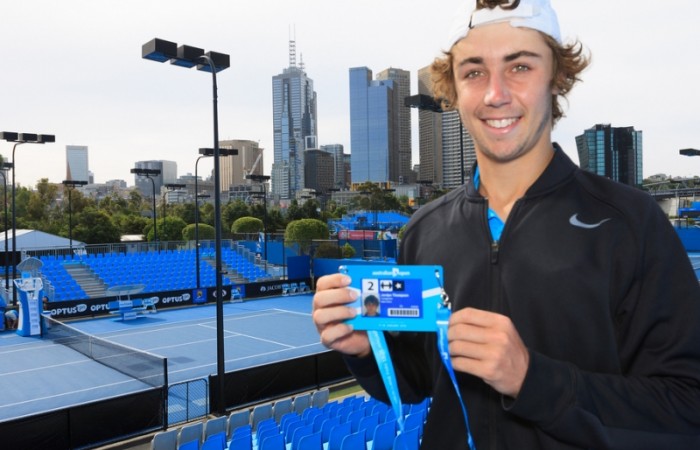 “It is an unbelievable feeling to be in the main draw of the Australian Open. I never thought it would come at age 19,” Thompson said.

Thompson walked out on court determined to dominate play and his unrelenting pressure upon Mitchell’s serve saw immediate results as he dismantled his top seeded opponent in the first two sets, 6-3 6-2, in just one hour.

While he has been showcasing some of his best tennis during the AO Play-off this year, Thompson did admit to having had some luck go his way in the first two sets.

“I don’t think Ben started all that well and he let me get off to a good start. But I think the start of the fifth was some of the best tennis I’ve ever played,” he said.

The two sets which followed gave rise to a sudden turn of events as Mitchell upped the pressure on Thompson who was growing increasingly frustrated by a few disputes with the umpire, throwing down his racquet on occasion.

Most points eventuated into long, physically demanding rallies; Mitchell began exhibiting some beautiful groundstrokes and deep, forehand winners but many a game was taken to nail-biting deuces as both men fought to take command. Mitchell commendably levelled the score to two sets apiece, posing the ultimate challenge for the 19-year-old.

Throughout the fifth set, it became difficult to determine whether it was more the mentally or physically demanding match as both men took the full duration of each timeout to rest their muscles, however slightly, before finding some inner strength to return to court.

Thompson made an epic comeback, with attitude, technique and game all improving. He surged ahead of his 21-year-old opponent, putting Mitchell’s fitness to the test as he ran him along the baseline tempting the error. With one break point protected, Thompson did not allow the second opportunity go to waste – trouncing to victory and securing what will be his first match in the main draw of a Grand Slam.

In 2013, Thompson won his first two professional titles with victories at Futures events in Austria and Australia. But he feels that winning the Australian Open wildcard has been the greatest achievement of his career to date.

And it was Court 6 that once again brought good luck to the Sydney-based player on Sunday. After the victory, Thompson said he was equally as excited as he was daunted by the thought of potentially facing some of his greatest tennis idols such as Lleyton Hewitt and Rafael Nadal on the other side of the court come January 2014.

“I don’t really want to play them first round,” Thompson chuckled.

Thompson’s last year in juniors came in 2012 and he has been feeling the heightened pressure in playing men’s standard tennis in the professional circuit.

“It’s a big jump. Last year was my last year of juniors and I didn’t make the quarterfinals of the 18s. I was pretty small back then. I didn’t really have a big serve, I didn’t really have a good shot, and I was hitting winners off every single wing out there (today). So I’ve definitely beefed up my game and transitioned okay,” he said.

“I don’t think I behaved my best today. I let a couple of things get to me because there were a couple of line calls that I strongly disagreed with. But at the start of fifth I was thinking, I’m not hitting the ball anymore, and decided to step it up.”

He paused especially wanting to thank his strengthening coach, Rudy Sopko, for all of his hard work, during the past year in particular.

“I owe him a lot. He does a lot for me, he stretches me, works me hard, looks after my body and gives me whatever I need.”

With nothing to lose and everything to gain, Thompson is excited to make the most of this incredible opportunity.

“It’s not sinking in yet but I think it’s going to change my life playing the first round of the main draw of the Australian Open when I’m 19. But it’ll be tough.”

The victors of the Australian 12/u Championships were also crowned, with Valentina Ivanov defeating the No. 1 seed Olivia Gadecki 4-6 6-2 6-0 and Xin Mu Zhou claiming victory when Nikita Volonski retired due to a foot injury at 7-6(2) 2-1.