Tony Roche tonight joined a select club when he was presented with the President’s Spirit of Tennis Award during Monday night’s Newcombe Medal, Australian Tennis Awards. 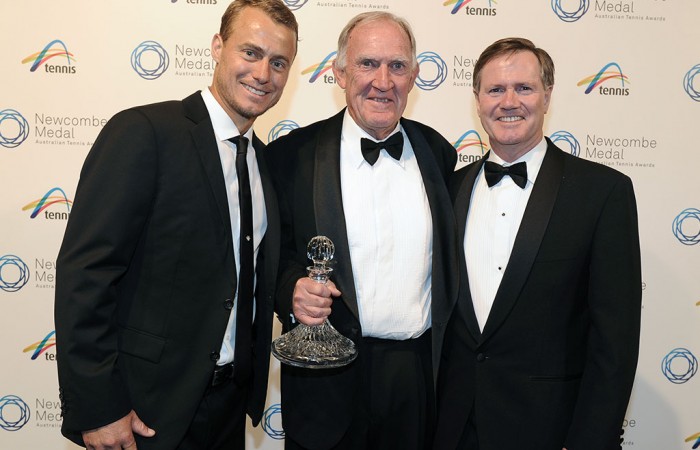 Tony Roche tonight joined a select club when he was presented with the President’s Spirit of Tennis Award during Monday night’s Newcombe Medal, Australian Tennis Awards.

Roche received his award from Lleyton Hewitt, himself a former recipient of this award, who has been mentored by this legend of Australian tennis.

“I’ve been lucky enough to work with him for a long time and I believe he is the greatest tennis coach ever to live,” said Hewitt.

“He is our living link to our greatest era and he is passing it on yet again to another generation – just what it takes and how much it means to represent this great country.”

While past winners of this award have been revered for either their playing ability (Peter Luczak and Lleyton Hewitt) or their coaching ability (Ian Barclay), Roche sits comfortably in both camps.

A winner of 16 Grand Slam titles (one singles, 13 doubles and two mixed), Roche was also a finalist at Wimbledon in 1968, dual US Open finalist and a four-time Australian Open semifinalist.

His lone Grand Slam singles triumph came at Roland Garros in 1966 as the third seed behind fellow Australians Fred Stolle and Roy Emerson.

While this was a high watermark in the left-hander’s individual career, it was his partnership with friend and countryman John Newcombe that Roche is best known.

When shoulder and elbow ailments brought his professional playing days to a close, Roche refused to completely leave the court, instead embarking on a second career as a coach.

The straight-talking Australian has since become a fixture in player boxes around the world as he worked with greats of the modern game including Ivan Lendl, Pat Rafter, Roger Federer and Lleyton Hewitt.

“My job is easy, it’s something I love,” said Roche.

“I’ve been lucky to work with some great champions but more importantly great people, in particular Lleyton [Hewitt] and Pat Rafter our captain … and John Newcombe, my great mate, we’ve had so many great times together, I want to thank John for his support over the years both on and off the court.”

But, as always Roche was looking ahead to the task at hand and Australia’s upcoming tie versus France in 2014.

And while Roche is no longer the official Davis Cup coach, there’s little doubt that he will be there supporting the team any way he can.