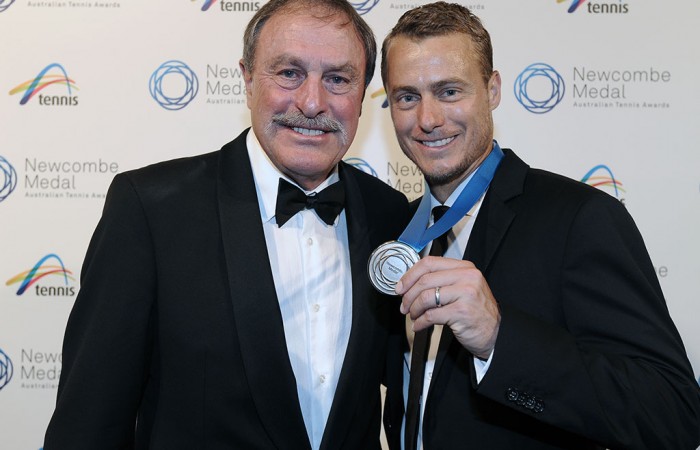 The South Australian tennis ace was formally recognised as Australia’s most outstanding player in 2013. He was presented the award by Australian tennis legend John Newcombe – in whose honour the award is named – who was also Hewitt’s first Davis Cup captain and mentor.

Hewitt made a point of acknowledging Pat Cash as his original Davis Cup inspiration, and thanking Newcombe and Tony Roche for originally blooding him in the side, as well as Pat Rafter for taking him under his wing.

“(This award) means so much. Obviously I’ve been fortunate enough to have a long career. There’s been plenty of highs and some definite lows as well but this is definitely up there with as high as it gets.

“Newk’s obviously a massive icon in our sport. He helped me in so many Davis Cup matches. I remember playing Todd Martin (in my first tie) and he told me ‘we’re going to war out there’ … Somehow Newk was one of the best motivators you could ever have sitting on the court there with you. For me to now have this Newcombe Medal means a lot, thank you.”

Hewitt, who spent 75 weeks at world No. 1 from 2001 to 2003, showed in 2013 he remains a force on the international circuit. Ranked outside the world’s top 100 in February, he has climbed back up the rankings, now sitting at No. 60 following a resurgent year on tour.

Launching his year with a title win at the AAMI Kooyong Classic in Melbourne in January, Hewitt went on to claim runners-up honours at the Hall of Fame Championships in Newport, Rhode Island in July, and wound back the clock by storming into the fourth round of the US Open in August.

The 32-year-old posted a straight-set win over current world No.8 Stanislas Wawrinka in the opening round of Wimbledon in June, and twice defeated current world No. 5 Juan Martin del Potro – at London’s Queen’s Club and in Flushing Meadows – in what was an outstanding year.

In 2013 Hewitt was once again at the heart of the Australian Davis Cup team, leading the green-and-gold back into the elite World Group for the first time since 2007 with a rousing win over Poland in September.

“The weeks I was gunning for this year were the Grand Slams but more importantly the Davis Cup,” Hewitt said.

“I wanted so badly to get back in the World Group before I retire, whenever that may be – I’m sick of answering that question.”

The South Australian thanked his Davis Cup comrades Roche, Rafter, Josh Eagle and Bernard Tomic, the latter who along with Hewitt helped return Australia to the elite 16-nation group with his unbeaten singles showing in 2013.

Newcombe said he was both thrilled and proud to present the award to Hewitt.

“It’s appropriate he receives it at the end of what has been a brilliant comeback year. He’s had an amazing year and his terrific results have again shown the grit and determination he’s renowned for,” Newcombe said.

“I’ve worked with Lleyton since he was 15 when Rochey and I enlisted him as an orange boy for Davis Cup. We knew then he was destined for a pretty special career, but probably didn’t expect the skinny kid with his cap on backwards to set a record (among Australians) for weeks spent at world No.1.

“This has been a remarkable year for Lleyton. His first for some time without the impediment of injury, and he’s made the most of it, posting some tremendous results, unexpected to almost everyone but him. He doesn’t get on the court unless he believes he can win, and his passion and commitment, particularly for Davis Cup, are an inspiration to us all.”

He thanked his wife Bec for “putting up with him” and allowing him to chase his dreams in the sport he loves.

“People once they do retire they’ll often tell you you’re retired for an awfully long team so get the most out of it while you absolutely can. I was out for four or five years on and off with injuries and I feel like now I can actually go out there and compete and enjoy being out there in the battle again,” he said.

The Newcombe Medal is the premier award presented on a night that recognises players, coaches, clubs, communities, volunteers and officials for their service to the sport.

“I would like to congratulate everyone who won awards and was nominated here tonight,” Hewitt said.

“It’s fantastic to come together as a tennis community and obviously in this great guy’s name as well. It really means a lot to be up here … it’s a fantastic thing that we started four years ago and I hope it goes on for many more years.”