Newks: Hewitt in running for another accolade

Newcombe Medal nominee Lleyton Hewitt again showed that when healthy, he belongs in the conversation when it comes to discussing the best players in the game. 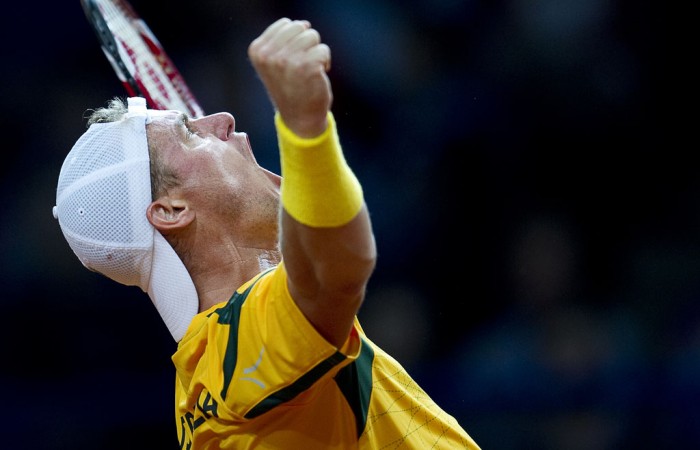 Lleyton Hewitt again showed that when healthy, he belongs in the conversation when it comes to discussing the best players in the game.

Now just a few months shy of his 33rd birthday, the indefatigable South Australian posted one of his best seasons in recent memory, in 2013 scoring several big-name scalps, producing his best tennis on the Grand Slam and Davis Cup stage, and hitting his highest ranking in three years.

And to cap it all, Hewitt has been nominated for the Newcombe Medal, awarded to the best elite Australian tennis player of the year.

“It means a lot to me, honouring a guy like John Newcombe who meant so much to me in terms of really instilling the Australian history and tradition (in me), in particular playing Davis Cup for Australia; he was my first captain of the Davis Cup team,” he said.

Indeed, Newcombe’s influence has ultimately seen Hewitt go on to become one of the most fiercely loyal and passionate Davis Cup players in our nation’s history – perhaps even in the history of the competition.

And his loyalty was rewarded when Australia defeated Poland in its World Group Play-off tie in September, elevating the team to the World Group for the first time in six years. It will give Hewitt a crack in 2014 at the Davis Cup trophy he covets almost above all else in what are now the latter stages of his playing career.

Hewitt was central to Australia’s successful transition in 2013 from zonal power to World Group member. Alongside Bernard Tomic, he went undefeated in singles play, and also teamed with Matthew Ebden against Uzbekistan in April to win the decisive doubles rubber.

Such success was mirrored in individual play at the Grand Slams. Top tenners Stanislas Wawrinka and Juan Martin del Potro will attest that Hewitt played well above his current ranking of No.60 when ousting them from Wimbledon and the US Open respectively.

That latter run was Hewitt’s finest Grand Slam performance in more than four years. In addition to beating del Potro under lights on the massive stage of Arthur Ashe Stadium, he came mere points from defeating 24th-ranked Mikhail Youzhny – which would have sent him into the quarterfinals – before ultimately going down in five.

It served to remind the tennis world that Hewitt is as fearsome competitor as they come, despite the fact he’s about to enter his 17th season as a pro and after all his injury-riddled years dating back to 2007.

It’s a testament to his motivation levels, which are put into even greater perspective when you consider that many of his contemporaries have either retired, burned out or are not currently achieving the same success.

Being awarded the Newcombe Medal would be a fitting recognition of that motivation, which has helped Hewitt to become one of the more enduring Aussie tennis greats.

“It means a lot obviously to go up there and catch up with Newk,” Hewitt said of the awards night, which will take place at Melbourne’s Crown Palladium Ballroom on Monday night.

“To go there and have a chance to win the Newcombe Medal will be fantastic.”