Nickelodeon and Tennis Australia have announced a three-year partnership to produce the hugely popular Kids Tennis Day ahead of the Australian Open. 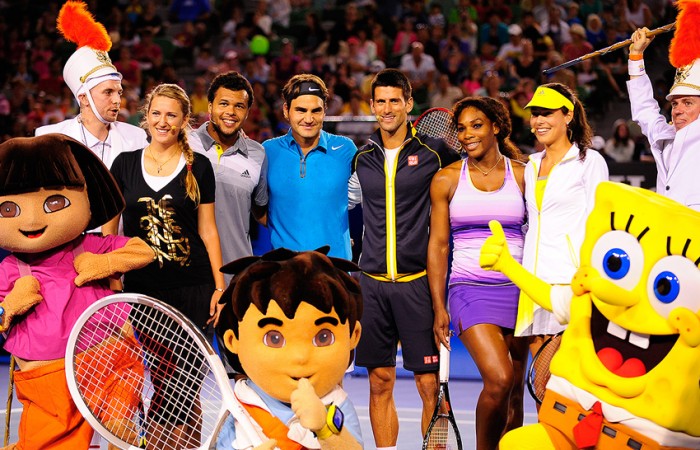 Global kids entertainment brand Nickelodeon and Tennis Australia have announced a three-year partnership to produce the hugely popular Kids Tennis Day event that takes place in the lead up to the Australian Open.

The event works in association with the MLC Tennis Hot Shots program and encourages kids to play tennis alongside some of the world’s greatest players.

The decision to partner followed their successful collaboration on multiple initiatives throughout 2012 and 2013, including Kids Tennis Day 2013, which resulted in 15,000 guests in attendance, a 70 per cent increase from the previous year.

The 2014 event, which takes place on 11 January, is set to be bigger than ever with the appointment of 17-time Grand Slam champion Roger Federer as the official Kids Tennis Day ambassador. Federer will take centre stage alongside Nickelodeon’s SpongeBob SquarePants and a host of entertainers yet to be announced.

Ben Richardson, General Manager for Nickelodeon Australia and New Zealand, said that Nickelodeon was excited to expand on its partnership with Tennis Australia and build on the success of the Kids Tennis Day 2013 event.

“As a leader in family entertainment, this is a great opportunity for us to use our experience with kids and take Kids Tennis Day to a whole new level. We are looking forward to working with Tennis Australia on their national yearlong events program, which will ultimately encourage the next generation of tennis players in Australia,” he said.

As part of the partnership activity, Nickelodeon will also be supporting the MLC Tennis Hot Shots promotional programs throughout the year, along with the AO Blitz and Australian Open Series throughout November and December 2013.

The AO Blitz is a national competition that allows individuals, clubs and schools to play tennis, win prizes and have an Australian Open 2014 player represent their local town. It is the largest participation drive ever seen in Australian tennis.

Kids Tennis Days will feature at each AO Series event, which will see SpongeBob SquarePants and other Nickelodeon favourites join the world’s best tennis players on the following dates:

Craig Tiley, Tennis Australia CEO and Australian Open Tournament Director, added: “Kids Tennis Day has become an integral part of our Australian Open line-up and one of the keys to its success is partnering with a brand that kids can resonate with.

“Nickelodeon provides us with expert knowledge and a deep family connection that will assist us in our goal of encouraging kids to attend our events and play tennis. Working closely with Nickelodeon’s dedicated events team, we’ve created a strong entertainment calendar for a great family day out.”

For a complete line-up of tennis events and for more information on Kids Tennis Day, visit hotshots.tennis.com.au/kids/kids-tennis-day.

Tickets for Kids Tennis Day will be on sale from 4 December.