Storm Sanders: back in the game

Storm Sanders is thrilled to be competing after a three-month injury absence, and is looking to improve on what has been a breakout season. 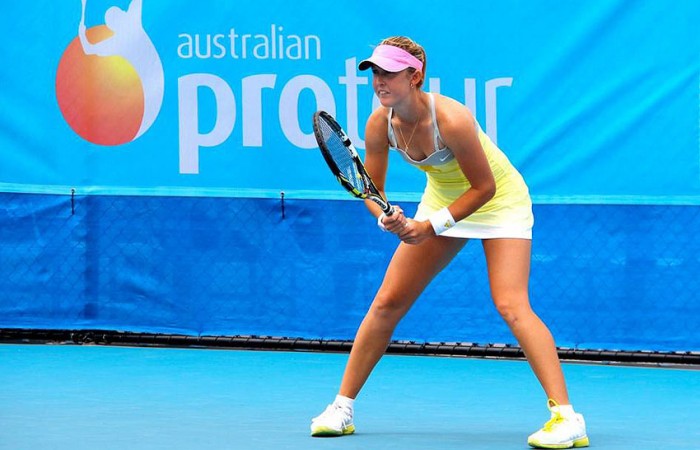 It’s especially deflating to see a promising talent surging up the rankings, only to be felled by an injury that completely stalls their momentum.

That’s exactly what happened to Storm Sanders, who only recently returned to the tour after being forced out of the game for three months due to cartilage bruising in her left ankle.

But rather than dwell on missed opportunities, Sanders instead sees the setback as a blessing in disguise.

“I was really bummed that I couldn’t play any of the Aussie ITF tournaments (following the US Open), especially the ones in Perth and Margaret River because they are in my home town, but it has been a really productive three months,” she told tennis.com.au.

“I have been in the gym everyday working on my upper body strength, doing a lot of cardio in the swimming pool, watching a lot of my previous matches on the computer and doing a lot of mental work. A lot of this stuff I wouldn’t have been able to do if I had been playing the tournaments so it’s been really great to have a bit of time off from the court and focus on other areas of my game.

“The injury has also helped me realise how lucky I am to be doing something I love. Sometimes we take what we do for granted as tennis players but now I realise how much I love tennis and want to be a professional tennis player so it has given me extra incentive and motivation to work harder and keep improving.”

It’s thus been a joyous return for the 19-year-old Aussie, who in the past two weeks has appeared at ITF-level events in Dubai and Toyota, Japan. Although she fell in the opening round in the Middle East, she scored her first victory in Japan before going down to top seed Kurumi Nara – hardly a bad result.

It was her first win since reaching the semifinals of the $50,000 ITF event in Yakima, Washington in July, the end of a six-month purple patch of form that saw her go 26-11 and slash her ranking from No.619 to a peak of No.217.

Now ranked No.251, the powerful left-hander’s rapid improvement simply came down to improved confidence and belief.

“The turning point was the week of the Launceston 25k event where I qualified and won the tournament; that gave me the belief that I could beat top quality players and I started believing a lot more in myself and what I could do on a tennis court,” she explained.

Yet it was not long after the semifinal appearance in Yakima that she was diagnosed with her ankle injury; given she wasn’t experiencing pain on the court, she forged ahead to the US hardcourt season. And that’s when more serious problems surfaced.

“At that time I started to feel pain on court, so we made the decision to go back to Melbourne and get it taken care of,” she said.

“It’s still a slow process; we have to monitor it for the next six months or so but I have a really great support team who are making sure we are doing everything right for my ankle like the right treatment, volume on court and in the gym.”

Provided she feels healthy coming out of her most recent two-week stint on the ITF circuit, Sanders will turn her attention to the Aussie summer of tennis, beginning with the Australian Open Wildcard Play-off at Melbourne Park as part of the annual December Showdown.

Good results throughout December and January would be the continuation of a stunning season on tour which has provided the popular personality with a whole raft of exciting moments and positive memories.

“The highlights would be winning my first ITF title at Launceston, especially coming through quallies which made it extra special for me. Another highlight was being ‘orange girl’ at the Fed Cup tie in Switzerland. I was honoured to be a part of the Australian team and it was an amazing experience for me,” she reflected.

“My goal at the start of the year was to make US Open quallies, which meant I’d have to drop over 400 (ranking) places in a few months so when I got into quallies, I was over the moon and that was a real highlight for me too.

“I’m really excited for the summer in Australia. It’s by far the most exciting time of the year for any Australian player and I can’t wait to have a great start to 2014.”