Contest heats up with a week to go in Queensland

Rounds three and four of this year’s Asia-Pacific Tennis League Queensland conference were completed over the weekend in tricky overcast conditions for the players at both the Brisbane and Toowoomba venues. &nbsp; The men’s defending champions and home team for round three, the Tennis Brisbane Chargers trumped the Tennyson Volt in a 5-1… 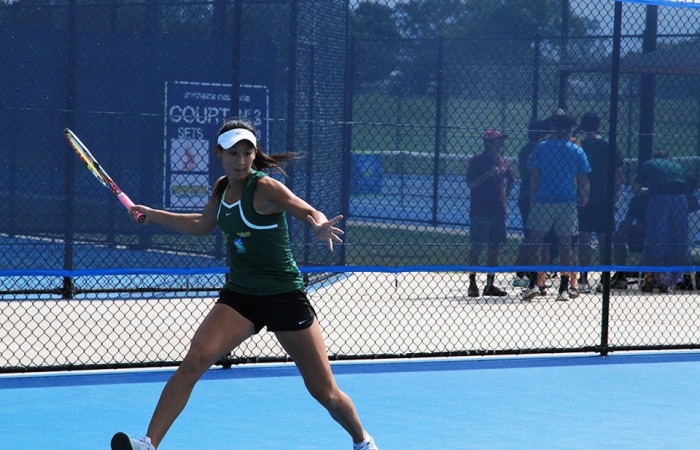 Rounds three and four of this year’s Asia-Pacific Tennis League Queensland conference were completed over the weekend in tricky overcast conditions for the players at both the Brisbane and Toowoomba venues.

The men’s defending champions and home team for round three, the Tennis Brisbane Chargers trumped the Tennyson Volt in a 5-1 triumph, ending the Volt’s hopes for a finals spot in their debut season. The Chargers showed their experience and depth of line-up securing three singles rubbers and both doubles against the new Volt side. The match of the night however saw Volt team captain Maverick Banes (ATP ranking 712) secure the visitor’s lone rubber with a 4-3 4-2 win over Gavin van Peperzeel, ranked 582 in the world.

In what was a first for the ATL Queensland Conference, the Beenleigh Blaze and Toowoomba Tigers men’s teams tied on Friday night. Their battles lead to an unheard of result, where all rubbers, sets and games were level after the completion of the final match.

The Shaw Park Sharks men’s and women’s teams kept their unbeaten season alive with 4-2 and 5-1 wins respectively over a gallant Sunshine Coast Breakers outfit. The final two women’s matches on Friday went to the Tennyson Volt and Beenleigh Blaze who outclassed the weekend’s hosts Tennis Brisbane Chargers and Toowoomba Tigers.

Sunday saw round four contested in true Toowoomba conditions at the Toowoomba Regional Tennis Centre – USQ. The wind was strong and rain threatened throughout the day, but fortunately all matches were completed.

The home side, Toowoomba Tigers looked for the support of the local crowds to help them in their plight against both men’s and women’s conference favourites. The men showed great fight, eventually succumbing to the Tennis Brisbane Chargers 4-2. The women’s hosts could do nothing against the Shaw Park Sharks who were too good with their recruit of Junior Fed Cup representative Priscilla Hon returning to the ATL over the weekend and helping the defending champions to a 6-0 win, securing a spot in the conference final.

Other men’s action saw the Shaw Park Sharks defeat the Beenleigh Blaze 4-2 and the Tennyson Volt knock off the Sunshine Coast Breakers 5-1. The Volt women were also in fine form as they took down the Sunshine Coast Breakers 4-2 to keep their finals hopes alive. Last year’s women’s runner up the Beenleigh Blaze also defeated the Tennis Brisbane Chargers 4-2 placing them in prime position for another shot at the title.

After four rounds, last year’s men’s and women’s champions the Tennis Brisbane Chargers and the Shaw Park Sharks sit atop the ATL QLD Conference ladder and are the teams to beat heading into the finals. The last conference round will be contested at the Beenleigh Tennis Club this Friday evening with the finals set for the Queensland Tennis Centre, Tennyson Sunday afternoon from 1pm.