Top seed Simona Halep has defeated Sam Stosur to clinch the season-ending Tournament of Champions on Sunday and her sixth WTA title of 2013. 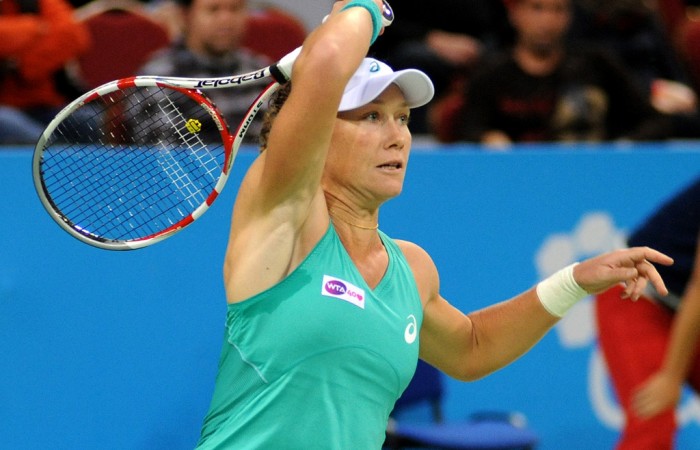 Top seed Romanian Simona Halep has defeated fourth-seeded Australian Sam Stosur 2-6 6-2 6-2 to clinch the season-ending Tournament of Champions on Sunday for her sixth WTA title of the season.

“I played really well this week. I want to thank everybody who came here to support me. They helped me a lot,” Halep said, cheered by a large crowd of Romanians who travelled to Sofia, including legendary 1970s tennis player Ilie Nastase.

“I had some problems with my leg but I wanted so much to win this match and this tournament that now I’m just happy. I hope to play next year like this year.”

Stosur explained: “It was a tough match today. I was trying very hard but today she was just too good.”

An aggressive Stosur managed to break Halep’s serve early in the first set to take a 3-0 lead.

Halep, who struggled with a leg injury and a much lower first serve percentage, managed to hold her next service game, but she failed to convert two break points in the fifth game to let Stosur hold serve.

Both wrapped up their next two service games to love in no time.

But Halep let the Australian convert a break point in the eighth game by making a double fault and lost the set.

The Romanian broke Stosur in the third game of the second set but then lost her own service game.

In a topsy-turvy set, an unsettled Stosur was broken again in the fifth game.

Halep held her next service game to love, broke Stosur again in the seventh game and took the set 6-2.

Both started well in the decider before Stosur lost concentration and let the versatile Halep break her serve twice in the fifth and seventh game to take the set 6-2 and the match.