Following the launch of Rod Laver's memoir, we take a look at the greatest moments from his illustrious career that helped shape that very book.

Tennis legend Rod Laver was at Melbourne Park yesterday to launch his memoir, giving media, fans and fellow players the chance to reflect on a simply extraordinary career.

Here are the top 10 highlights from that career, presented chronologically, that have helped cement the Queenslander among the very greats of the sport, and in many people’s eyes, made him the Greatest Of All Time.

Always a promising talent, Laver confirmed it when he claimed victory at the Australian Open in 1960, staged that year at the Milton courts in Brisbane. Laver beat second seeded Roy Emerson 7-5 in the fifth set in the semifinals before pipping No.1 seed Neale Fraser 8-6 in the fifth in an enthralling final. 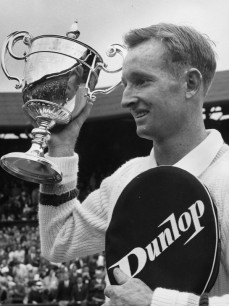 Laver took a huge leap forward in the amateur ranks in 1962, becoming just the second male player in history to claim the coveted sweep of all four major titles in a single year. He beat Roy Emerson in a four-set Australian Open final before travelling to Paris and ousting Emerson again in the final at Roland Garros, this time coming from two-sets-to-love down. He thrashed compatriot Martin Mulligan in the Wimbledon final and completed the historic Grand Slam feat with victory over Emerson in the title match in New York.

Recognising the pro ranks as a way to secure his future, Laver turned professional and joined players like Lew Hoad, Ken Rosewall and Pancho Gonzalez on tours around the United States, Europe and South Africa in a series of “one-nighters”. The gruelling schedule saw Laver play hundreds of matches in big indoor arenas and on makeshift courts (like canvas stretched over ice rinks) in a bid to promote tennis. While he accrued valuable competitive experience against some of the world’s best, the downside was that he was from that point barred from competing in Grand Slams and Davis Cup.

The year 1968 was one of seismic change in the tennis world, the season in which amateurs and pros were for the first time united and permitted to play the same events in a new “open” era. The first of these was at Roland Garros, and this was quickly followed by Wimbledon, which Laver won in his first trip back to the All England Club in six years; he defeated Tony Roche in straight sets in the final.

Incredibly, after having already achieved the lauded Grand Slam, Laver did so again seven years later, this time in the Open era against stronger opposition, making the achievement arguably more impressive. Andres Gimeno was his victim in the Australian Open final (again at Milton), while he beat compatriots Tony Roche and John Newcombe in the French Open and Wimbledon finals respectively. It was again Roche that Laver came up against in the US Open final, and in soggy conditions, Laver beat his fellow left-hander to achieve sporting immortality. He remains the only player to achieve the Grand Slam twice.

Laver’s dominance at Wimbledon was such that in his last four trips to the All England Club in the 1960s – 1961, 1962, 1968 and 1969 – he came away with the title. He reached the fourth round in 1970 to take his winning streak at the venue to 31 matches, before Brit Roger Taylor ended his magnificent run. It remained a record until Bjorn Borg came along and won his fifth straight Wimbledon title in 1980.

While tennis had become open in 1968, Davis Cup didn’t admit professionals to the competition until 1973. And that year, Australia was able to assemble a veteran yet imposing line-up of Laver, Newcombe, Rosewall and Mal Anderson, a team Bud Collins described as “perhaps the strongest team ever”. Laver, at age 35 and playing Davis Cup for the first time in 11 years, helped Australia end the United States’ five-year reign with a crushing 5-0 victory in Cleveland; Laver and Newcombe won both their singles rubbers and combined to win the decisive doubles rubber.

Laver became just the eighth Australian in history to be inducted into the ITHOF when he was inducted in 1981 at a ceremony at Newport, Rhode Island in the United States.

Melbourne Park’s magnificent centrepiece stadium, the world’s first tennis arena with a retractable roof, was prior to the 21st century was simply known as Centre Court. But tournament and precinct officials bestowed the great honour on Laver of naming the arena after him in 2000; seen lit up in large letters at night and hosting major international music and sporting stars year-round, the arena is world famous, and as a result, Laver’s name has transcended tennis.

At a function in the presence of media and colleagues beneath the arena named after him, Laver launched his memoir, a fabulous account of these achievements and more with a forward written by the great Roger Federer. It was at this event that Laver was also named global Ambassador of the Australian Open, another string in his already magnificent bow.