The legendary Rod Laver was honoured to launch his memoir and be named as a global Ambassador for the Australian Open at Melbourne Park on Wednesday. 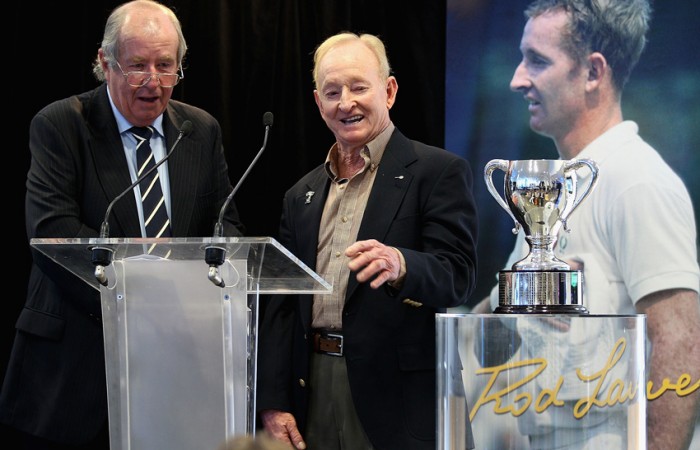 The legendary Rod Laver was honoured to launch his memoir and be named as a global Ambassador for the Australian Open at Melbourne Park on Wednesday.

Tennis greats Roger Federer, Rafael Nadal, Pat Rafter and Lleyton Hewitt joined in lauding Laver through a moving video tribute, congratulating him both on the release of his autobiography and new role with the Australian Open.

“For me he achieved so much,” Federer said. “I had someone to look up to, someone to get inspired from or just someone you are very happy and proud to meet from time to time. When you get good support from a legend like Rod Laver it’s only helpful, of course.”

Federer wrote the forward in Laver’s memoir, and was glowing in his assessment of the left-hander from Rockhampton.

“Rod Laver stood above all others as the greatest champion our sport has ever known,” the Swiss wrote, he himself a 17-time Grand Slam winner.

But Laver is perhaps best summed up by fellow Queenslander Pat Rafter: “I think he’s known as much for his humility as his success,” Rafter said.

“He’s continued to stay a very grounded Rocky boy and I think that’s been a testament to him.”

An emotional Laver, the only man in history to have won two calendar-year Grand Slams, was clearly humbled by the experience as he spoke before an intimate gathering of media, colleagues and friends.

“I thought I’d like to do this (write a memoir). I had a long career, had a chance to meet a ton of people, had good successes, so I said, ‘let’s start and see how far I can go with it all’,” he revealed.

“I was thrilled to be a part of the tennis world … the one thing I guess I’m even more proud of is the fact that my opponents became my best friends.”

It’s a night that’s gone down in tennis folklore; Laver presented the Swiss with the trophy and Federer broke down in tears, overwhelmed at receiving the silverware from a legend of the game and a player he idolised.

“Roger’s been such an asset to the world of tennis … the way he competes, puts out his best effort every time he goes out on the court,” Laver said.

The announcement of Laver’s Australian Open ambassadorial role was made by Tennis Australia President Steve Healy.

Laver said he was proud to take on the role of Australian Open Ambassador and to promote the Grand Slam event.

“I’m amazed at how the Australian Open has grown into the world class tournament it is today and I’m very proud to represent our very own Grand Slam as an Ambassador,” Laver said.

“The players all tell me how much they love playing here in Melbourne and I look forward to promoting the event both here in Australia and around the world.”

“Of course naming Rod Laver as Ambassador for the Australian Open seems like a mere formality as we meet here at the arena named in his honour, and the stage for Australia’s biggest sporting event.

“But the qualities Rod Laver personifies – excellence, fair play, spirit, fun, and most outstandingly, humility – are the very qualities the Australian Open strives to emulate.”