Sam Stosur has gone down in the WTA Kremlin Cup final as Romania's Simona Halep continued her superb year with her fifth title. 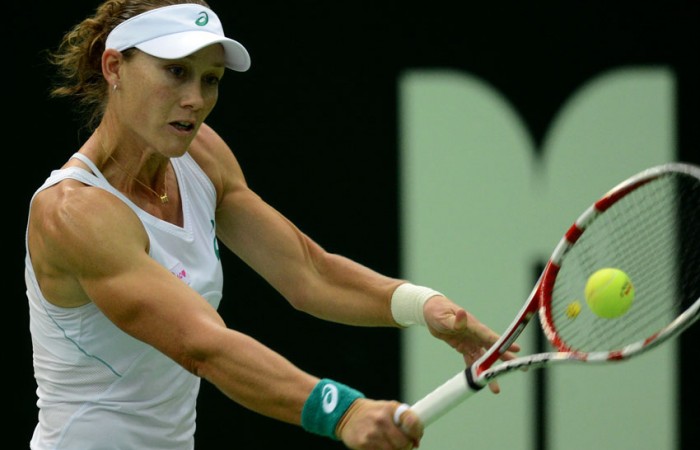 Sam Stosur has gone down in the WTA Kremlin Cup final as Romania’s Simona Halep continued her superb year to beat the Australian 7-6(1) 6-2.

Yet there was more success for the Aussie in doubles; later on Sunday she teamed with Svetlana Kuznetsova to win her first tandem title in over two years with a 6-1 1-6 [10-8] victory over compatriot Anastasia Rodionova and Russian Alla Kudryavtseva, the second seeds.

In the singles final, 22-year-old fifth seed Halep – ranked 18th in the world – took one hour and 41 minutes to defeat seventh-seeded and 2011 US Open champion Stosur, and record only her second win in the pair’s five meetings.

“It’s an incredible year for me and I am enjoying every moment of it,” said Halep, who is projected to break into the Top 15 after her latest win.

“Now I already have all of my thoughts about the Tournament of Champions in Sofia (the second tier end of season tournament, the top event taking place in Istanbul next week).

“It’s a very special event for me and I’m preparing thoroughly for it and hope to perform there at my top level.”

Halep and Stosur, who was looking for her second successive title having won in Osaka last Sunday, were evenly-matched throughout the first set but the Romanian took a firm grip on the tie-break to take the set in just over an hour.

Stosur, 29, started the second set brightly breaking her opponent immediately but Halep, who has won all of her four previous finals this year, stepped up a gear and broke back before breaking Stosur’s serve on another two occasions to ease to victory.

Stosur will also play at the Tournament of Champions in Sofia, beginning next week.

She praised her Romanian opponent in an interview with wtatennis.com.

“I think it was quite a battle to get to the tie-break in that first set – I was down 3-1 and got it back on serve, which was great. But she really got on top of me in that tie-break, and from then on it was a real uphill battle,” Stosur said.

“But all credit to her – she played solid the whole way through today.”