Hobart has been chosen to host the blockbuster Australia versus Russia Fed Cup by BNP Paribas World Group tie in February 2014. 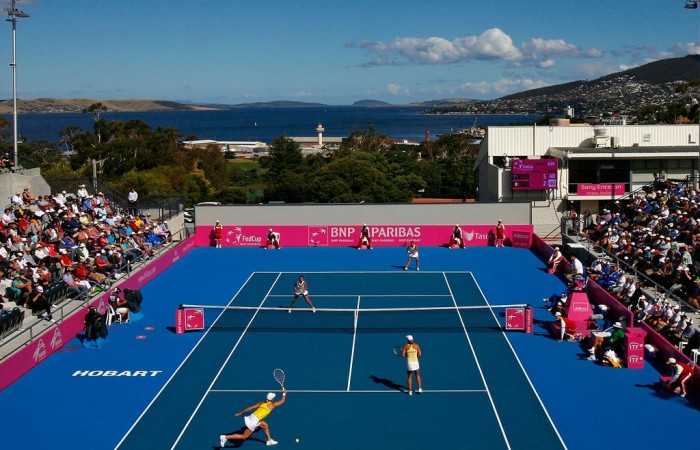 Hobart has been chosen to host the blockbuster Australia versus Russia Fed Cup by BNP Paribas World Group tie in February 2014.

The Australian camp is delighted with the choice of the Domain Tennis Centre, which is internationally renowned as one of the most picturesque tennis venues in the world.

“It is going to be a great tie and we are all excited to be playing in front of a parochial home crowd in what will be a big test for us,” Australian No.1 Sam Stosur said. “I am really looking forward to it.”

“It is just such a great venue in a very welcoming town like Hobart. It is the perfect place for what is a big tie for us,” Molik said.

The venue holds a special place in the heart of the Fed Cup captain as it was the site of her first WTA title, the Hobart International, in 2003.

“Obviously I loved playing tennis there and our girls do too. I think it will give us a tremendous opportunity to show the very well educated Tasmanian tennis fans just how talented our Australian girls are up against one of the best teams in the world,” Molik continued.

The bid to host the tie was hotly contested with the Hobart submission winning through because of the high quality venue, excellent hard court and the city’s excellent track record in enthusiastically supporting international tennis.

Premier of Tasmania, The Hon. Lara Giddings is looking forward to welcoming back the Fed Cup to Tasmania.

“It is fantastic to see the return of the Fed Cup to Tasmania,” Premier Giddings said.

“This is a major coup for Tasmanian tennis and for our tourism industry and we are proud to be supporting the event with a grant of $50,000.

“This event will provide international exposure for our state while giving Tasmanians the chance to see some of the best players from Russia, a powerhouse of world tennis,” Premier Giddings added.

Lord Mayor of Hobart, Alderman Damon Thomas said it was fantastic news for Tasmania and tennis fans that the City of Hobart will host another round of the Fed Cup.

“Hosting such an important tennis event is a privilege and a major accolade for our city and I congratulate Tennis Australia for again choosing Hobart as the host destination,” Alderman Thomas said.

“We welcome the significant community and economic benefit and exposure to international and domestic tourism markets this event will mean for Hobart and being awarded such a prestigious event also clearly shows the value of the significant upgrading of the Domain Tennis Centre to make it a world-class facility,” said the Lord Mayor.

“They are a world-class events team working out of a top class venue with some tremendous support from the Tasmanian Government, Hobart City Council and the community,” Tiley added.

The Australian squad for the tie will be announced early next year. The winner of the Australia–Russia clash on 8–9 February will advance to the semifinals in April.