Australian tennis legend Rod Laver says Roger Federer is the greatest player of all time, but admits Rafael Nadal is making a strong case for himself. 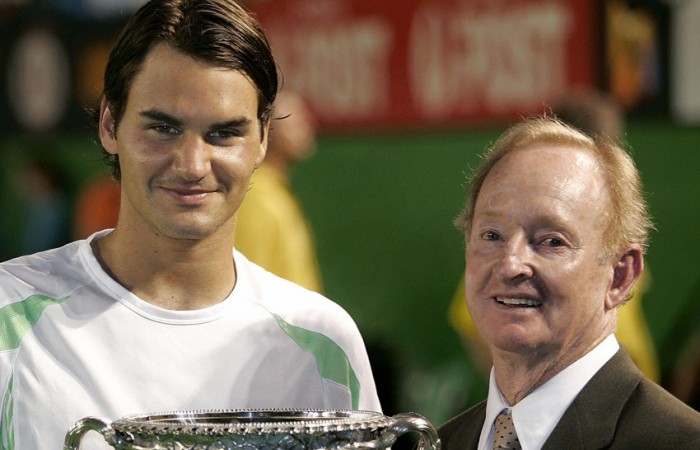 Australian tennis legend Rod Laver says Roger Federer is the greatest player of all time despite a slide down the rankings and another painful defeat on Thursday — but admits Rafael Nadal is making a strong case for himself.

Federer has won a record 17 Grand Slam titles and occupied the No.1 spot for a combined total of 302 weeks in a gilded career that has had many rushing to proclaim him as the finest in history.

But the Swiss, now 32, has tumbled to seventh in the world. The rise and rise of fierce rival Rafael Nadal, who now has 13 majors, has led many to question whether in fact the Spaniard will in time be regarded as the finest player ever.

Federer’s third-round defeat at the Shanghai Masters to Frenchman Gael Monfils, ranked a lowly 42nd in the world, will only add to the swirling debate over when he should hang up his racquet.

“Just because his record, the consistency over a span of six, eight years has been pretty amazing. I think that sort of tells you something.”

But Laver, the only man twice to win the calendar Grand Slam – all four major tournaments in a calendar year – acknowledged that Nadal was also pushing for the accolade.

The Spaniard, 27, has this season made a remarkable return from a long injury lay-off, winning 10 titles including his eighth French Open crown and the US Open. He returned this week to the top of the world rankings.

With Federer fading, a new “Big Three” is taking shape at the top of the men’s game also featuring Novak Djokovic of Serbia and Britain’s Andy Murray.

“It’s quite amazing that he’s done so well,” said 75-year-old Laver of Nadal.

“But he’s certainly an unbelievable player. I watched the US Open this year with Djokovic. It was just incredible. It was such a great match (the final).

“You look at his game. Then, of course, you can look at Djokovic two years ago, three years ago when he played so well on the clay back then. We thought, ‘How is he doing this?’ He went on a regimen of training, stretching, diet. That’s what happens.

“So, yes. Well, I think you have to be able to see them at the end of their career. Federer is not at the end of his career, but he’s now finding it difficult to compete week in and week out, where before he had no trouble competing.”

Laver believes the Swiss, despite his dip, remains capable of adding to his huge haul of Grand Slam titles.

“I think he’s certainly capable of winning maybe the Australian, and of course Wimbledon is something that he’s pretty involved with. I think he likes those two type of games. Unfortunately, someone like Nadal is always going to knock him off on the clay.”

And he said the older players get, the more difficult it is to maintain consistent top-level tennis.

“The next day I go out and there’s nothing there.

“So what is it? Is it the desire? Is it your emotion, does it come up? Is your adrenalin not flowing as well as it normally does in a match?

“That’s the times I found a problem. I don’t know whether Roger’s feeling anything of that nature. But sometimes I notice him, he just doesn’t have it that day. But the day before he was magnificent.”

And Laver believes the calendar Grand Slam, not achieved since he did it in 1969 for the second time, will one day be repeated.

“When I look at the way Nadal plays on grass, clay and hard courts, especially this year, he’s obviously one that can win it. The only reason why Federer didn’t win a Grand Slam was because of Nadal on clay.”