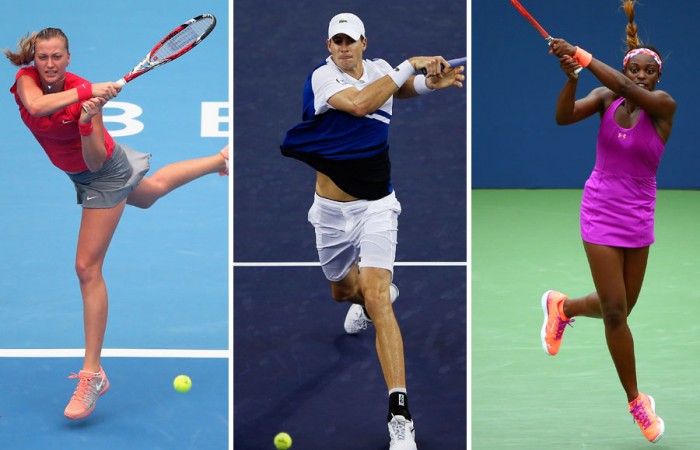 World No.7 Kvitova returns to Western Australia after winning the crown with Tomas Berdych in 2012.

In 2011 the 23-year-old from the Czech Republic won her first Grand Slam title at Wimbledon, going on to win the year-end WTA Tour Championships, play in the winning Czech Fed Cup team and finish the year as world No.2, a career high.

Stepanek, a former world No.8 and currently ranked No.6 in doubles, won men’s doubles titles at the Australian Open in 2012 and the US Open in 2013, and was a member of the champion Czech Republic Davis Cup team in 2012.

USA’s No.1 powerhouse and current world No.13 John Isner will team with rising star Sloane Stephens.

“Every time I have played [Hyundai Hopman Cup] I’ve enjoyed myself so much. I absolutely love my time in Perth,” said Isner, who holds seven ATP career singles titles.

Isner teamed with Bethanie Mattek-Sands to win the event in 2011, and in 2013 paired with Venus Williams. “For me playing the Hopman Cup is perfect preparation for the Australian Open. It allows me to get down there early, get used to the heat and on top of that get top notch, quality matches,” Isner said.

Stephens made her mark on the women’s tour earlier this year when she beat world No.1 Serena Williams en route to the semifinals at Australian Open 2013. Her star continues to rise, reaching the fourth round at Roland Garros and the US Open, and the quarterfinals at Wimbledon.

At just 20 years of age the current No.12 has the world at her feet.

“I had an awesome three weeks in Australia this year so I’m looking forward to going to Perth and being able to play there,” said Stephens, whose ranking has skyrocketed 26 places in 10 months.

She is particularly excited about the Hopman Cup’s New Year’s Eve ball.

“I always love getting dressed up. That will be good to be able to get out and put on a nice outfit and look cute.”

> Hyundai Hopman Cup: by the numbers

Milos Raonic, 22 years old and on the cusp of the top 10, will be joined by 2012 junior Wimbledon champion Eugenie Bouchard for Team Canada.

“I think Hopman Cup is a great way to start the year. You have a lot of guaranteed matches, a lot of opportunities to find your way especially after the off season,” said world No.11 Raonic.

Raonic is Canada’s highest ever ranked player and currently holds five ATP career singles titles, two of which he has won this year. He is looking forward to the unique format of the event.

“It gives you a chance to really get match sharp. It’s a great competitive atmosphere, a team atmosphere, something different and something I haven’t been involved in.”

Former US Open champion Sam Stosur will fly the flag for Australia with Bernard Tomic, who looks to continue his unbeaten record at Perth Arena.

“I’m really excited about returning to Perth for the second time now and playing with Sam is even better. I think we can push Australia to do even better than we did this year,” said Tomic, who led the nation back into the prestigious Davis Cup world group in the play-off against Poland last month.

Poland will make their debut with world No.4 Agnieszka Radwanska and world No.15 Jerzy Janowicz, the first Polish man ever to make the semifinals at Wimbledon.

Team France will see world No.9 and fan favourite Jo-Wilfried Tsonga team with No.27 Alize Cornet who replaces Marion Bartoli who retired from the sport in August. This is Cornet’s second appearance at the Hopman Cup; she teamed with Gilles Simon in 2009.

The 2014 champion Anabel Medina Garrigues is back for the fourth time, defending the title for Spain alongside world No.19 and two-time Hyundai Hopman Cup champion Tommy Robredo.

World No.22 Andreas Seppi and US Open semifinalist, world No.31 Flavia Pennetta, will represent Italy.

“To have the likes of Kvitova, Isner, Stephens, Raonic, Bouchard and Robredo sign on and to know the players see the event as great preparation to kick start their Australian summer is exciting.”

“The ITF is delighted to see another outstanding field for the 26th edition of the Hyundai Hopman Cup. The move to the new Perth Arena further enhanced what was already a highlight of the Australian tennis season,” said Ricci Bitti.

“We will continue to work closely with Tourism Western Australia and Tennis Australia to ensure the event’s ongoing success.”

Single and multiple session tickets are on sale now. Details on tickets and travel packages are available at www.hopmancup.com/tickets. Tickets can be purchased online at www.ticketek.com.au or by calling 1300 888 104.