Serena Williams and Lleyton Hewitt to play in Brisbane

Newly crowned US Open champion Serena Williams and Australian favourite Lleyton Hewitt have today confirmed they have signed on for the Brisbane International 2014 presented by Suncorp. 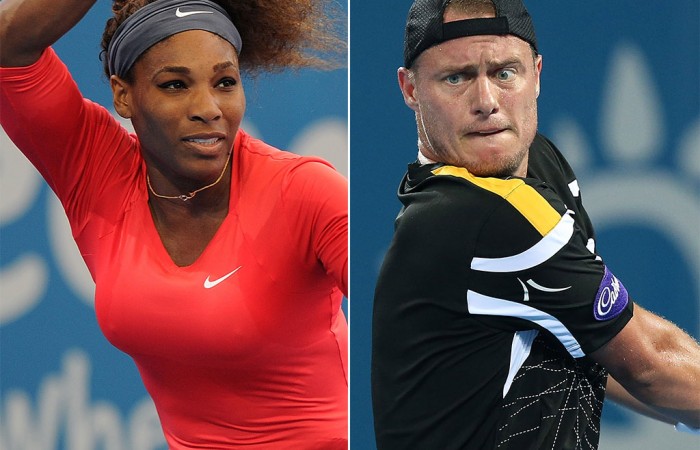 Newly crowned US Open champion Serena Williams and Australian favourite Lleyton Hewitt have today confirmed they have signed on for the Brisbane International 2014 presented by Suncorp.

World No.1 Williams is looking forward to returning to Brisbane this summer to defend her title.

“I remember I was really excited to win,” Williams said. “I was so focused on the final and felt like this was a good start for the Australian Open.

“They have a great fitness centre; they have great courts that are identical to the surface played in Melbourne. Plus I have a week off after the tournament, so it’s always a good preparation to play in Brisbane, and it’s always fun to go back and try and defend your title,” added the American, who will be making her third appearance at the Brisbane International in 2014.

Throughout her career Williams has captured an impressive 55 WTA singles titles and four Olympic gold medals.

During 2013, the talented right-hander has captured nine WTA titles, including her fifth US Open crown and second French Open championship.

When Williams returns to Brisbane this summer, she is also looking forward to further exploring the city’s sites.

“There are always so many great restaurants in Brisbane. I love to try and make my way around city and hang out a bit down town … I have seen a little bit of the city and I’m going to have to keep going so I can see more,” Williams revealed.

Australian stalwart Lleyton Hewitt is also returning to Brisbane in 2014. This will be the South Australian’s second appearance at the tournament.

“It was the first time I played the Brisbane International this year and I had a lot of fun up there,” the former world No.1 said.

“It’s going to be another tough tournament; they always have extremely strong fields. Roger Federer is going there for the first time as well, so that’s going to be pretty exciting for the Brisbane International,” Hewitt added.

Like Williams, Hewitt also enjoys starting his year in the Sunshine State.

“Great atmosphere out there and great crowds – they really get behind their tennis in Queensland, and I’m really looking forward to going back for a second year in a row,” Hewitt said.

The 32-year-old, who is working closely with Australian tennis legend and Davis Cup coach Tony Roche, said that it was great to see his mate Pat Rafter at the Brisbane International in 2013.

“We have a pretty strong relationship and a close bond, and it was fantastic he was out there supporting me.

“It’s slightly different playing on Pat’s centre court [Pat Rafter Arena] … He was obviously a big part of my success in the Davis Cup when I first came on, and a guy that I idolised,” Hewitt said.

“We are thrilled to welcome back our 2013 champion Serena Williams and Lleyton Hewitt, both players are crowd favourites,” said Pearson.

“Serena is one of the most dominant figures of world tennis. Since claiming the Brisbane title this January, Serena has again had a wonderful year on the court which has culminated in her winning her fifth US Open title and second French Open crown.

“Lleyton is one of our country’s most accomplished players and has a strong and loyal following here in Queensland. At 20 he was the youngest male ever to be ranked number one in the world,and at age 32 he is still achieving impressive results, and adds star power to our line-up,” continued Pearson.

Earlier this year Hewitt, who has won 28 career titles including two Grand Slam crown (US Open, 2001 and Wimbledon, 2002), reached the semi finals of Queens (London, England) and almost became the oldest player to win the tournament. During July he finished runner-up at the Newport event for a second consecutive year. He then went on to have a sterling run at the US Open, reaching the round of 16.

Minister for Tourism, Major Events, Small Business and the Commonwealth Games Jann Stuckey welcomes Serena Williams and Lleyton Hewitt back to Queensland to compete at the Brisbane International 2014.

“Serena wowed tennis fans at the Brisbane International this year with a fantastic display of her extraordinary talent, which resulted in her winning her first Brisbane title at Pat Rafter Arena,” Ms Stuckey said.

“To have Hewitt also return to Queensland for his second Brisbane International is a testament to the tournament’s reputation as a world-class event on our summer calendar.

“The Newman Government is proud to support major events like this through Tourism and Events Queensland as part of our plan to double the annual overnight visitor expenditure from $15 billion to $30 billion by 2020.”

Brisbane International 2014, presented by Suncorp and supported by Tourism and Events Queensland, will take place at the Queensland Tennis Centre, Brisbane from 29 December 2013 to 5 January 2014.

In 2013 the Brisbane International won the prestigious ATP International Group Best Fan Experience award for a second year in a row.

> Details on these tickets and licensed tour operators are available at www.brisbaneinternational.com.au/tickets

> Tickets can be purchased online at www.ticketek.com.au/brisbaneinternational or call 1300 888 104.

General public single session Brisbane International tickets will be on sale from 9 October 2013.