The most iconic trophies in Australian sport are heading to Asia. 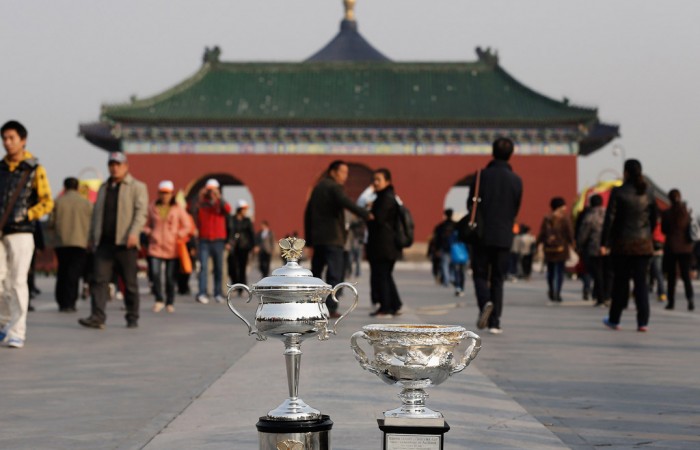 The most iconic trophies in Australian sport are heading to Asia.

The magnificent Australian Open trophies will set off on their third tour through Asia in 2013, with Korea, Singapore, China and Hong Kong on the itinerary.

As the biggest sporting event in the world in January, the profile of the Australian Open – the Grand Slam of Asia-Pacific – continues to grow in the region, fuelled by the success of home-grown champions such as China’s Li Na and Japan’s Kei Nishikori.

Thousands of fans have flocked around the Australian Open trophies as they’ve toured exotic Asia in past years. How thrilling is the possibility that they might one day be hoisted by one of those fans on finals weekend at Rod Laver Arena? It is a dream such as this that stunning silverware inspires.

Singapore will host the Norman Brookes Challenge Cup and Daphne Akhurst Memorial Cup for the first time. “Singapore is a key market for the Australian Open,” said Tennis Australia’s CEO Craig Tiley. “Large numbers of Singaporeans attend the Australian Open each year and interest in the sport is at an all-time high, particularly as the country prepares to host its own major event, the WTA Championships, from 2014.”

China is now familiar territory for the Australian Open trophies, and once again they will join the world’s top players at the China Open in Beijing and the Rolex Masters in Shanghai.

The trophies will be included in an on-court ceremony at the China Open as the event’s top six ballkids are named as members of the elite Australian Open ballkid squad. This exchange program started in 2013, with six outstanding Chinese ballkids in the thick of the action at Melbourne Park. In return, the two “top gun” ballkids from AO 2013, Dylan Colaci and Olivia O’Meara, will work the China Open and act as mentors for the local ballkid squad.

Major public activations designed to promote both the Australian Open and tennis will take place in Beijing, Shanghai, Guangzhou and Shenzhen.

In November the second Australian Open Asia-Pacific Wildcard Play-off will be staged in Shenzhen, with top Asian players in fierce competition for coveted Australian Open wildcards in both singles and doubles. In 2013 the play-offs were won by China’s Wu Di and Yuxuan Zhang and the event was broadcast to a potential audience of 190 million people as well as live-streamed on major online portals globally.

“The Australian Open is already big business in Asia, with major contracts in broadcast, sponsorship and ticketing,” Tiley said. “More than half the Australian Open’s global media value is now generated in Asia and we are committed to promoting the event and growing the sport of tennis in the region.”