Poland hit back in doubles rubber

Australia's quest to return to the Davis Cup World Group has extended into a third day as Poland edged a five-set doubles thriller in in Warsaw on Saturday. 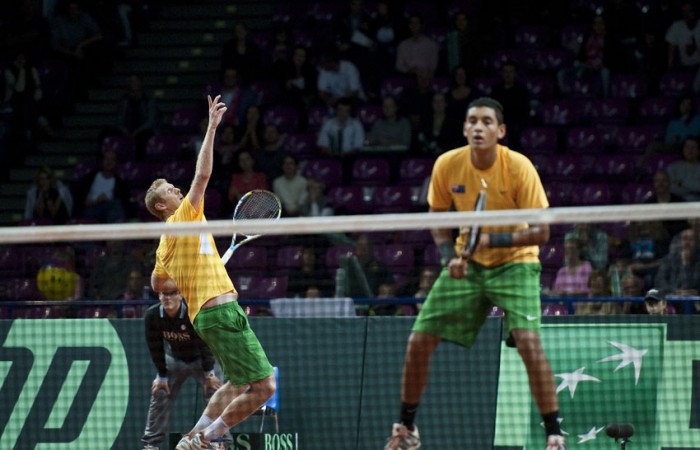 Australia’s quest to return to the Davis Cup World Group has extended into a deciding third day as Poland edged a five-set doubles thriller in their playoff in Warsaw on Saturday.

Poland cut Australia’s lead in the best-of-five claycourt tie to 2-1.

> view the schedule and results

The Australians are still strongly placed to secure a return to the competition’s top tier for the first time since 2007, with surprise late inclusion of 18-year-old Kyrgios a bold tactical ploy by captain Pat Rafter to keep Lleyton Hewitt fresh for the reverse singles.

Bernard Tomic can wrap up the tie with a win over Polish No.1 Lukasz Kubot on Sunday while a loss would mean Hewitt facing 113th-ranked Michal Przysiezny in a deciding fifth rubber.

Tomic and Hewitt were superb in winning singles matches on Friday to give Australia a 2-0 lead, allowing Rafter the luxury of breaking up the unbeaten Davis Cup doubles duo of Guccione and Hewitt.

“We always knew this was going to be a very tough doubles match and, if that situation happened and we lost, then Lleyton would have been very flat for the fifth rubber,” Rafter said.

“After seeing what happened on day one, we’re very confident of our boys getting the job done on day three.

“Sometimes you have to lose a battle to see if you can win the war at the end of the day so that was exactly our thinking.”

Time will tell if Rafter’s patient approach pays off but Guccione and Kyrgios very nearly finished the job.

“He’s hurting right now but that was one of the most positive experiences I’ve seen,” Rafter said of Kyrgios’s debut.

He had only been called into the four-man squad on the eve of the tie, replacing Marinko Matosevic.

The former world No.1 junior marked his senior Grand Slam debut with a first-round upset of Czech veteran Radek Stepanek at the French Open earlier this year and showed few signs of nerves at Warsaw’s Torwar Hall indoor arena.

He and Guccione trailed Matkowski and Fyrstenberg, ranked 19th and 20th in doubles respectively, by two sets to one before winning a tense tiebreaker to force a fifth set.

Australia fought back from a break down but Guccione was broken for the second time trailing 5-4, surrendering the match with a double fault.

The 28-time champions have reached the World Group Play-offs for the past three years, only to fall at the last hurdle.

Each time they held 2-1 leads heading into the final day only to lose both reverse singles rubbers.

But Rafter is confident they are well placed to end a six-year stint in the Davis Cup wilderness.

Poland, trying to reach the World Group for the first time, are without star player and world No.14 Jerzy Janowicz due to a back injury.