Lleyton Hewitt and Bernard Tomic have put Australia on the brink of a Davis Cup World Group return with straight-set wins on Day 1 of their play-off in Poland. 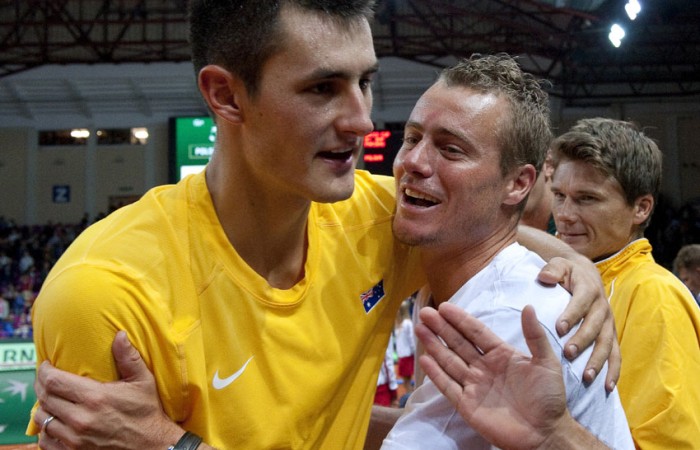 Lleyton Hewitt and Bernard Tomic put Australia on the brink of a long-awaited return to the Davis Cup World Group with clinical straight-set wins on day one of their playoff in Poland.

Ageless warrior Hewitt carried on from his stellar run at the US Open with a 6-1 6-3 6-2 demolition of Lukasz Kubot, Poland’s No.1 in the tie after the injury withdrawal of star Jerzy Janowicz.

Australian No.1 Tomic then backed it up with a hard-fought 7-5 7-6(1) 6-4 win over Michal Przysiezny to secure a 2-0 lead in the best-of-five claycourt tie in Warsaw.

> view the draw and results

Neither player dropped serve in a dream start for Pat Rafter’s squad.

Australia can seal a return to the competition’s top tier for the first time since 2007 if the unbeaten duo of Hewitt and Chris Guccione win Saturday’s doubles.

But, having surrendered final-day leads in their past three playoff ties – including last year’s heartbreaking loss to Germany in Hamburg – they aren’t getting carried away.

“It’s by no means over but it’s a perfect start for us,” said Hewitt, who improved his Davis Cup singles win-loss record to 40-13.

Feeling like he’d lost none of the form from his run to the last 16 at Flushing Meadows, Hewitt was off to a flyer against 70th-ranked Kubot.

Aided by 17 unforced errors from the Pole – and the support of a vocal group of Australian Fanatics at the Torwar Hall indoor arena – Hewitt wrapped up the first set inside 32 minutes.

Kubot tried to rally but 58th-ranked Hewitt’s clean striking and smart tactics on serve never allowed him into the match as the 32-year-old wrapped up victory inside two hours.

“Coming in playing Lukasz, their number one, on day one I saw it as an opportunity for me to crack the tie wide open,” Hewitt said.

“I was very prepared for whatever Lukasz was going to throw at me today.”

Tomic was made to work harder for victory against 113th-ranked Przysiezny, called in to replace Wimbledon semifinalist Janowicz.

But the world No.51 served beautifully – hitting 86 per cent of first serves in the opening set – and showed coolness under pressure in the big moments.

“I’m very happy LLeyton won and that gave me a lot of motivation.

The 20-year-old is building an impressive Davis Cup record with 11 wins in 13 singles rubbers.