Lleyton Hewitt and Bernard Tomic will lead Australia into battle against a Polish side missing injured leading light Jerzy Janowicz. 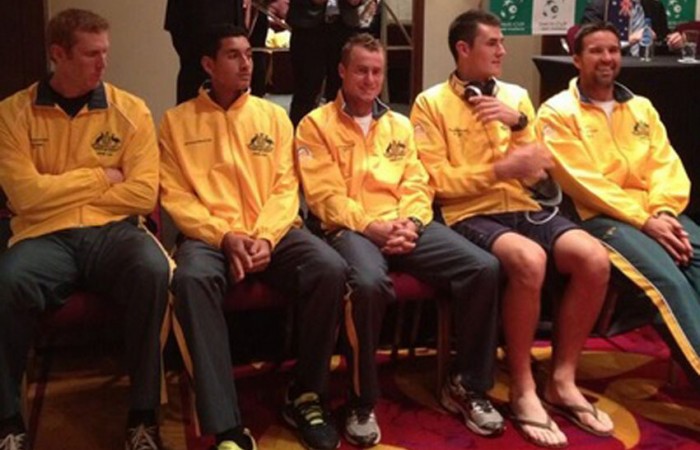 Lleyton Hewitt and Bernard Tomic will lead Australia into battle against a Polish side missing injured leading light Jerzy Janowicz.

The tie, to be staged on 13-15 September on indoor clay at Warsaw’s Torwar Hall, will see Hewitt facing world No.70 Lukasz Kubot in the opening singles match on Friday (starting Saturday 12am AEST).

Hewitt is coming into the tie fresh off his run to the last 16 at the US Open, which included a second round defeat of then-world No.6 Juan Martin del Potro.

Tomic will then take on 113th-ranked Michal Przysiezny, who replaces world No.14 Janowicz.

Wimbledon semifinalist Janowicz on Thursday succumbed to an ongoing back problem that hampered him during a short first-round exit at the US Open.

Hewitt will team up with Chris Guccione in the doubles on Saturday.

Australian captain Pat Rafter would ideally be hoping for an early victory – allowing for 18-year-old Nick Kyrgios to make his debut in a dead rubber on Sunday.

Kyrgios’ selection comes at the expense of Marinko Matosevic, who is still to prove himself under pressure at the top level.

The talented 28-year-old extended his Grand Slam duck to 11 matches with a first-round loss at the US Open, admitting he was being plagued by doubts.

“He’s so impressive in training, he works harder than anyone,” Rafter said of Matosevic.

“He prepares himself well. He’s just got his own mental demons he has to overcome.”