Poland is keeping its Davis Cup cards close to its chest but Australia is preparing as if world No.14 Jerzy Janowicz will play in this week's World Group play-off. 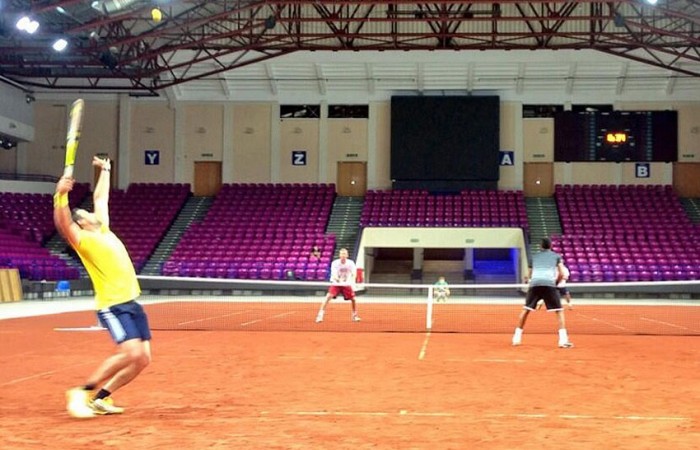 Poland is keeping its Davis Cup cards close to its chest but Australia is preparing as if world No.14 Jerzy Janowicz will play in this week’s World Group play-off.

Wimbledon semifinalist Janowicz is in doubt for the tie, starting in Warsaw on Friday, due to an ongoing back problem.

> find out when the tie is being broadcast on 7TWO

Should the 22-year-old Polish star miss out, it would provide a huge boost to Australia’s bid to return to the competition’s top tier for the first time since 2007.

Janowicz has not trained since being hampered by the injury in a shock first-round loss at the US Open and Polish officials will wait until match eve to announce whether or not he will play.

Australian team captain Pat Rafter had hoped to gather some insight into Janowicz’s condition when he fronted the Polish media in Warsaw on Tuesday.

But the injury didn’t even rate a mention and Rafter said his side could not afford to worry too much about the opposition.

“They’re trying not to give us anything so at this stage we’re preparing that Jerzy’s going to play,” Rafter told AAP.

“We’re yet to see him hit and it looked like he just rolled up yesterday as well, so it doesn’t shape up well for him playing.

“But we’ve got to expect that he’s playing and we’re preparing for that.”

Should Janowicz be ruled out he would likely be replaced by 113th-ranked Michal Przysiezny.

The decision will affect Australia’s tactics, with Rafter saying team spearhead Lleyton Hewitt would likely only play in one singles rubber, as well as the doubles alongside Chris Guccione.

If Janowicz plays Hewitt could be saved for the crucial reverse singles, with Marinko Matosevic possibly earning a berth in the opening day of matches alongside Bernard Tomic.

Or if the Polish ace is ruled out, it could tempt Rafter to go for an early kill by naming big guns Tomic and Hewitt first-up.

The Australian squad has spent the past three days training on the indoor claycourt at Warsaw’s Torwar Hall.

Rafter described the court as heavy and slow but felt it did not offer the hosts any great advantage.

“But we’re playing these guys at home and it’s going to be a very tough one.”

Hewitt, 32, had no concerns about adjusting to the slow clay court quickly after after his impressive run to the last 16 at the US Open.

“Every time I change surfaces I hop on the court straight away and I’m finding the middle of the racquet. For me it’s not a big deal,” Hewitt said.