Australia could receive a huge boost in its bid to return to the Davis Cup World Group with Polish No.1 Jerzy Janowicz in serious doubt for this week's playoff tie. 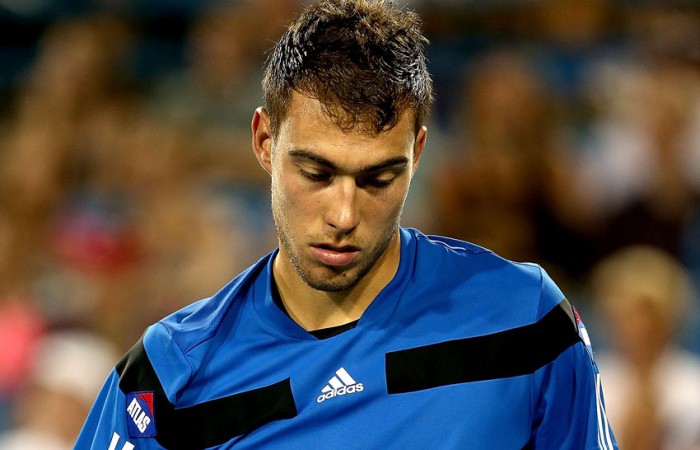 Australia could receive a huge boost in its bid to return to the Davis Cup World Group with Poland spearhead Jerzy Janowicz in serious doubt for this week’s playoff in Warsaw.

The world No.14 is battling an ongoing back problem that contributed to his shock first-round loss at the US Open.

Some reports in Europe suggest the Wimbledon semifinalist has already been ruled out of the decisive tie, starting on Friday, and he could require surgery after scans revealed a spinal disc herniation.

However, Poland are yet to announce whether the talented 22-year-old will be fit to play.

Should he be ruled out, Janowicz would likely be replaced by 113th-ranked Michal Przysiezny.

Janowicz was visibly troubled by the problem in a straight-sets defeat to Argentine Maximo Gonzalez at the US Open last week, resorting to serving underarm at one point.

Avoiding the powerful, 203cm Janowicz would be a welcome gift for an Australian team spearheaded by Lleyton Hewitt and Bernard Tomic.

Australia, 28 times Davis Cup champions, are aiming to return to the competition’s top tier for the first time since 2007.

Pat Rafter’s team qualified for the World Group playoff with an impressive win away to Uzbekistan in April while Poland are looking to reach the competition’s top 16 for the first time.

Marcin Matkowski and Mariusz Fyrstenberg will likely face unbeaten Davis Cup duo Hewitt and Chris Guccione in the crucial doubles rubber while Marinko Matosevic is an option for Australia in the singles.

The Australian team have already arrived in Warsaw to finalise preparations for the claycourt clash.