The AO Blitz visited Innisfail and the Gold Coast at the weekend; we recap the highlights of this Queensland swing and preview what's coming up next. 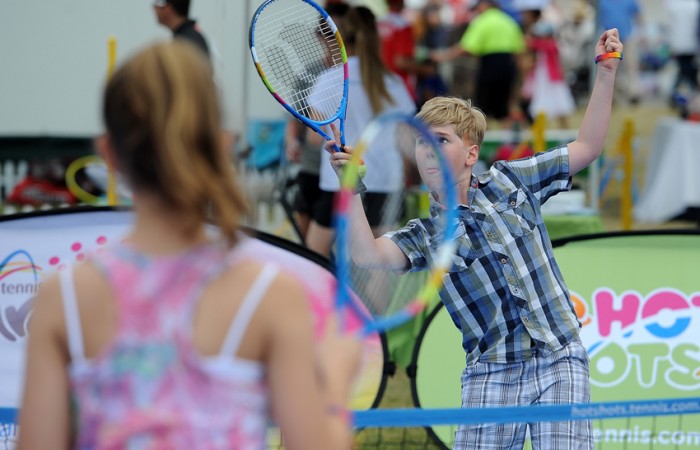 “When people come to our tournaments they bring their fishing rods!” laughs Kathy Martin, life member, 2001 women’s champion and a tireless volunteer who adds to both the character and smooth functioning of the Innisfail Tennis Club.

With the spectacular Johnstone River that divides the Far North Queensland town brimming with barramundi – plus plenty of crocodiles, including one that can apparently be seen from the clubhouse when the tide is low – fishing would be an obvious complement to the tennis that’s played from early morning to well after dark at the nine-court complex in Innisfail, a town of some 9000 people that’s built around the banana and sugar cane industries.

But there’s unlikely to be any fishing distractions this weekend. Aside from the Nerada Tennis Championships, a two-day tournament that’s attracted 115 enthusiastic entrants from throughout Far North Queensland, the Innisfail Tennis Club is also the first locational visit for the AO Blitz, which provides communities throughout Australia a chance to win individual prizes and others for their town by simply connecting with tennis.

And connecting with tennis is certainly top of the list today, where the AO Blitz offers people the chance to play MLC Tennis Hot Shots, experience Cardio Tennis or test their serve speeds. There’s also face painting for the kids and a free sausage sizzle. Others are tempted by the slushy machine, where the gold coin price tag is donated directly to official charity partners of the National Breast Cancer Foundation and Prostate Cancer Foundation of Australia.

One of the biggest attractions though, is the presence of the Australian Open trophies and many locals line up for their once-in-a-lifetime photo opportunity with the Norman Brookes Challenge Cup and Daphne Akhurst Memorial Cup, including Cassowary Coast Mayor, Bill Shannon, who officially welcomes those who attend.

As balls fly across mini courts and Cardio Tennis continues beneath the unforgiving North Queensland sun, there is no mistaking the enthusiasm of local community members. Some have a long and proud association with the game; others are experiencing it for the first time through the AO Blitz. “My son would play morning to night if I let him,” laughs one mother; “After seeing all this, I will definitely look at getting my children involved,” says another.

It’s an enthusiasm that’s reflected throughout the wider Innisfail community, which worked hard to recover after Cyclone Larry devastated the town in 2006 and bounced back again when Cyclone Yasi struck in 2011. The tennis club was directly hit in 2006, with fences wiped out, the clubhouse roof severely damaged (in fact, part of a nearby shop smashed through it) and lights not only shattered, but some blown away and lost forever in the Category 5 cyclone, one of the worst ever experienced in Australia. The most heartbreaking damage was to courts that were ruined beyond repair just months after the club had worked hard to resurface them.

Rebuilding lives was the immediate priority after Cyclone Larry wiped out homes, businesses and the banana crops that provide many locals with their livelihood but tennis was a means of restoring normality and within a matter of months it was being played again. “It was a hard time but we’re also proud of the way that we all came together,” notes Stewart Lindsay, Innisfail Tennis Club President.

Deservedly so, with no signs today of the havoc inflicted on the Innisfail Tennis Club, which didn’t just recover from the cyclone but pulled together to emerge stronger than ever; in 2010, it was named Queensland Club of the Year.

Innisfail therefore seems like tough competition in the AO Blitz initiative that could see towns win their very own player representative at Australian Open 2014. Simply by registering at aoblitz.com.au and undertaking some fun tennis challenges – the more you play, the more you win and importantly, you don’t have to be an experienced player – community members will earn points for their town and could have Novak Djokovic, Roger Federer, Serena Williams, Sam Stosur or any number of stars competing for them.

They’ll have to work hard though. The next day, the AO Blitz took centre stage at the Gold Coast Show; Sponge Bob Square Pants played MLC Tennis Hot Shots with enthusiastic young attendees, serve speeds were tested and Cardio Tennis was on offer. The presence of the Australian Open trophies again provided locals with a hands-on experience to of the silverware presented to the tournament champions – and undoubtedly an incentive too, to start earning points for their town so they could have their own representative at Australian Open 2014.

Next stops in more than 100 towns that will be visited as part of the AO Blitz are Ipswich and Toowoomba this coming weekend. More people than ever before will learn how fun and beneficial tennis can be; the fact that you can win many prizes, including a player for your town, is the bonus that you won’t want to miss.