Lleyton Hewitt has delivered a vintage performance to oust 2009 champion Juan Martin del Potro and reach the third round of the US Open in New York. 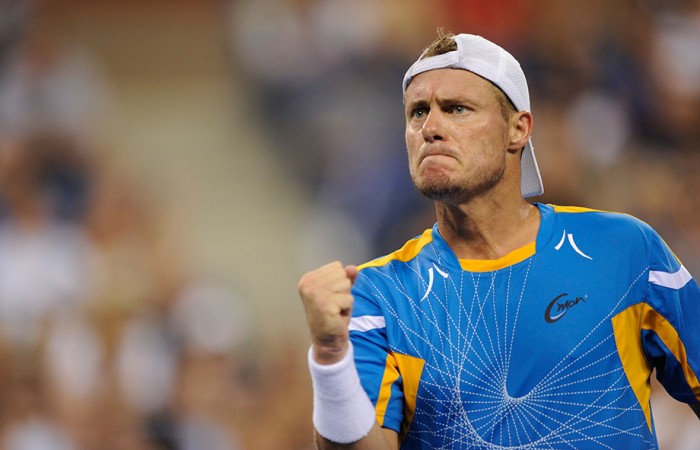 Lleyton Hewitt has delivered a vintage performance to oust 2009 champion Juan Martin del Potro and reach the third round of the US Open in New York.

Hewitt continued his excellent summer run with a spirited 6-4 5-7 3-6 7-6 (7-2) 6-1 victory over the sixth seed and has a golden opportunity to venture even deeper in the grand slam draw.

Champion in 2001 and contesting his 13th US Open, Hewitt will play little-known Russian Evgeny Donsky on Sunday for a spot in the last 16 after producing the biggest first-week shock of the tournament.

Del Potro, champion at Flushing Meadows in 2009, was hopeful of adding a second title to his collection after losing the longest Wimbledon match in history to world No.1 Novak Djokovic in his most recent grand slam tilt.

Hewitt, though, had other ideas and dragged the big Argentine out of his comfort zone with some crafty baseline tennis.

The 32-year-old upset the South American’s rhythm with floating backhand slices and, time and again, drew del Potro to the net and rifled winners past him.

The tactics worked a treat, especially in the fourth-set tiebreaker which Hewitt rolled through with some classic counter-punching to seemingly break del Potro’s spirit.

“I played one of the best tiebreaks of my life,” Hewitt said. “Just had to try and hold my service games.”

“Physically, I felt like I was just a bit more on top of him,” Hewitt said.

From two-sets-to-one down, Hewitt turned the match around and broke the Argentine twice more in the fifth set to take the second-round encounter.

Hewitt said pre-match it was “an honour” to be back under the bright lights of Arthur Ashe Stadium and he was clearly up the occasion.

In a Friday night prime-time match-up of former champions, Hewitt won the opening set and served for the second at 5-4 only to produce a flurry of unforced errors to allow del Potro back into the contest.
The pair traded breaks early in the third before del Potro seemed to seize control when he nabbed the set and had Hewitt taking a medical timeout for a scratch on his face after an earlier sprawl on court.

The never-say-die Hewitt hit back, however, and broke del Potro in the eighth game with a wonderful down-the-line pass – only to again falter trying to serve out the fourth set and send the match into a decider.

But he held firm to force the tiebreaker, which he dominated before racing through the deciding set.

Donsky is ranked 36 places below Hewitt at No.102 in the world and will be contesting his first grand slam third-round match.

Hewitt said he hit with the Russian “the other day” but that he didn’t know him at all.