Tomic tumbles out of US Open

Bernard Tomic has stumbled at the second-round stage of the US Open for the third year running after falling to British qualifier Daniel Evans in four sets. 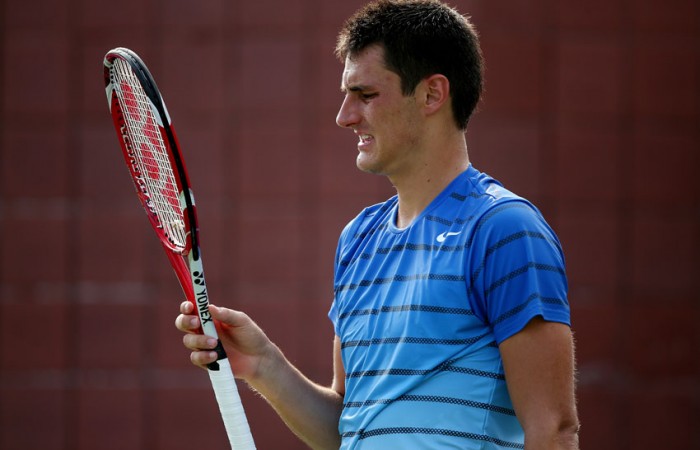 Lleyton Hewitt is the lone Australian standing at the US Open in New York after Bernard Tomic lost in the second round for the third year in a row.

Tomic led by a set and a service break only to lose 1-6 6-3 7-6(4) 6-3 to British qualifier Daniel Evans, blowing a big opportunity to make the second week at Flushing Meadows for the first time.

The 20-year-old former Wimbledon quarterfinalist had been strongly favoured to beat the world No.179 and progress to the last 32, but instead his second-round jinx continued.

Evans had upset 11th seed Kei Nishikori in the opening round, but there was no sign of the lowly-ranked qualifier reproducing such magic as Tomic rolled through the first set in 22 minutes.

In the second set, the two players traded a flurry of service breaks but it was Evans who reined in his double faults to move ahead and take out the set.

Evans took a stranglehold on the match by winning the vital third and there was no stopping the 23-year-old underdog as he progressed to the third round of a Grand Slam for the first time.

Tomic rued not being able to capitalise on his strong start and admitted he started feeling “afraid” of going after the ball.

The youngest player in the world’s top 100 blamed his up-and-down year on his age.

“You know, it’s tough. A lot of the guys out there are experienced,” he said.

“My tennis is good, but I lack experience.”

Tomic still has ambitions of getting back into the top 30 by the end of the year but said, for now, the focus would be on this month’s Davis Cup playoff in Poland, which Australia must win to get back to the top-tier World Group.

“The tie is very important to us. We had a chance last year and we missed it.”

Davis Cup mainstay Hewitt will be out to go at least one better than Tomic on Friday when he takes on sixth seed and fellow former Open champion Juan Martin del Potro.