Adding oomph to your game and tips to beat better players are topics covered in the all-new Australian Tennis Magazine “power” issue, which is now on sale. 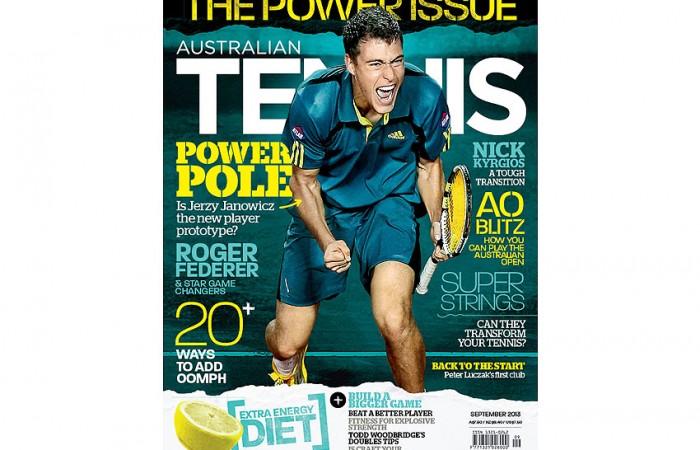 Want to add oomph to your overall game? Can you beat a better player? How do you take your tennis from big to explosive? Are you getting the most from your doubles partnership?

All those topics are covered in the all-new Australian Tennis Magazine “power” issue, which is now on sale at newsagencies or online.

“For all it’s cherished traditions tennis also thrives on change,” explains Australian Tennis Magazine editor Vivienne Christie. “We’re delighted to present a fresh look and more extensive content than ever before as we enter a powerful new era in our long publishing history.”

Some of Australia’s best tennis experts are on hand to provide quality information for the tennis community. In the September re-launch issue, Scott Draper explains why muscle matters in the modern game, Todd Woodbridge provides advice on doubles, Alicia Molik shares tips for juniors and Peter Luczak relates the importance of getting the right start in tennis as he takes us back to his first club in suburban Melbourne.

A long-time favourite with tennis fans, the new Australian Tennis Magazine has an increased focus on the everyday player. While still informing and entertaining with insights into top-level tennis – the September issue names the top-10 power players of the modern game and considers whether the improving Jerzy Janowicz is a big name to note – an ongoing priority is to ensure that the thousands of players in clubs and centres throughout Australia are getting the most from their games.

Recognising that the community provides the most solid foundations for success, there are also designated departments for clubs and coaches. “We hope that readers will not only enjoy our grassroots stories, but also share many of their own,” says Christie.

Just as the power game has added dimensions of craft, agility and tactics, there are also new elements of Australia’s only tennis publication to explore. Alongside a growing social media community, the September “power” issue coincides with the launch of a new Australian tennis YouTube channel, where you’ll see some Australian Tennis Magazine features expanded into original and ongoing feature series.