Sam Stosur arrives in New York having won nine of her past 11 matches, and will look to continue that form as she begins her assault on the 2013 US Open title. 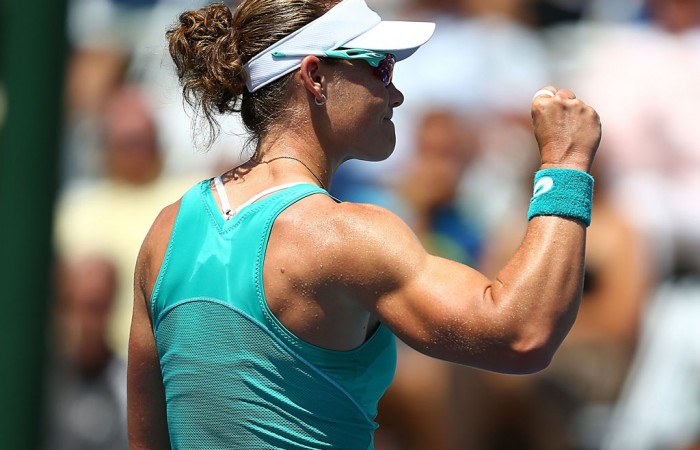 “It’s fantastic coming back here … I think no matter what lead-up you’ve had, however you feel, you can walk in here and think this is pretty cool and relive all those great memories and hopefully make them all happen again.”

That was Sam Stosur’s assessment on Saturday of what it felt like to return to Flushing Meadows, the site of her biggest career victory at the 2011 US Open.

And judging by the lead-up she has enjoyed to the year’s final major event, including her first tour title in two years at the WTA Southern California Open, the Aussie is feeling in good spirits about the game that has brought her such stunning success on North American hard courts.

Stosur opens her 2013 US Open campaign against US qualifier Victoria Duval. On paper it might seem like an easy match, yet even if Stosur was to progress, there is nothing simple about the draw she’s been handed in New York.

Potentially looming in the third round is big-hitting Russian 20th seed Nadia Petrova, who reached the fourth round last year and against whom Stosur has endured some epic battles, including here in the third round en route to the title.

In the fourth round she’s projected to face Petra Kvitova, the seventh-seeded Czech who brushed her aside in straight sets at the recent WTA Rogers Cup in Toronto and who this weekend reached the final in New Haven.

Should Stosur clear those tricky hurdles, her likely quarterfinal opponent is world No.2 Victoria Azarenka, who last week hoisted the trophy in Cincinnati following a stunning victory over Serena Williams, and who owns an 8-1 winning record over the Queenslander.

Yet that solitary victory for Stosur came in the pair’s most recent battle in the Southern California Open final, imbuing the 29-year-old with confidence at just the right time.

“I guess that was a really good breakthrough for me,” Stosur said.

“I hadn’t obviously beaten her before, and then to do it in the final and maybe on a surface where I actually hadn’t realized that was the case [Azarenka was undefeated on hardcourts in 2013 until that match].

“That was a great week. I thought I played some of the best tennis I played in a long time, which is always a nice feeling. I like playing on these courts and these conditions throughout the summer here.”

Stosur arrives in New York having won nine of her past 11 matches, and is arguably one of the more in-form and best-placed to make a title run at Flushing Meadows. Maria Sharapova is out of the tournament, Williams is in the opposite half of the draw, and Stosur is just one of four former champions playing the event; the others are the Williams sisters and Russian Svetlana Kuznetsova.

Despite this being her first tournament without coach David Taylor – a partnership that extended for six years – the Australian is sticking to her regular preparatory routines and sees the currently open and competitive state of women’s tennis as a sign that a second victory at Flushing Meadows is not beyond her.

“I think now coming into the US Open I’m feeling quite good,” she stated.

“Of course it’s a new week, and you’ve got to make sure you keep doing everything you need to do to continue on with that success.”