Petra Kvitova has ended Sam Stosur's seven-match winning streak with a straight-set victory in the third round of the WTA Rogers Cup in Toronto. 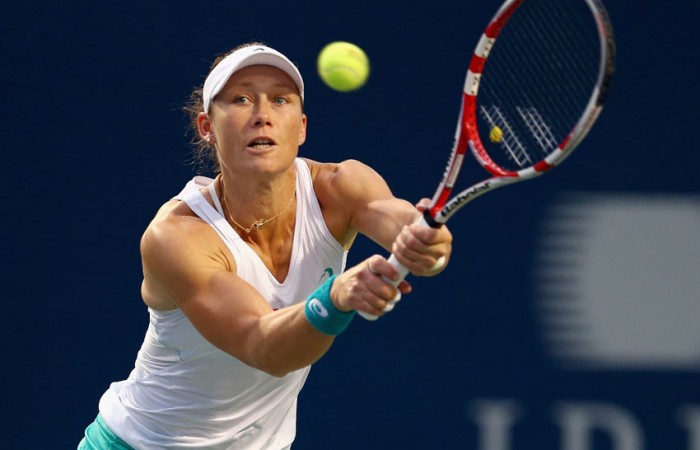 Petra Kvitova has ended Sam Stosur’s seven-match winning streak with a straight-set victory in the third round of the WTA Rogers Cup in Toronto.

The defending champion dished out a comprehensive 6-3 6-3 defeat of the 12th seed, advancing to the quarterfinals where she will meet Romania’s Sorana Cirstea.

Stosur had won five matches to claim the title at last week’s Southern California Open, and another two in Toronto – over Julia Glushko and Carla Suarez Navarro – to progress to the third round.

She had also won her last match against Kvitova in the third round at Rome in May, prompting Kvitova to tweet on Wednesday: “Tough first match tonight but happy I’m through! Playing Sam tomorrow, hoping for revenge after Rome :)”

And gain revenge she did.

The Czech flew out of the blocks and always looked in command of proceedings; even when Stosur came at her, she was able to summon another level and maintain her advantage.

After Kvitova pocketed the opening set, she and Stosur became embroiled in a tense battle in the third game of the second set, extending for several deuces.

The No.6 seed broke serve to win that game, building a 3-0 lead which soon became 5-1. Despite a late rally from Stosur, Kvitova nonetheless sealed victory in one hour and 24 minutes.

Stosur next heads to the ATP/WTA Cincinnati Masters to continue her build-up to the US Open, beginning Monday 26 August.