UPDATE: Sam Stosur has won her first title in almost two years with victory over Victoria Azarenka in the final of the WTA Southern California Open in Carlsbad. 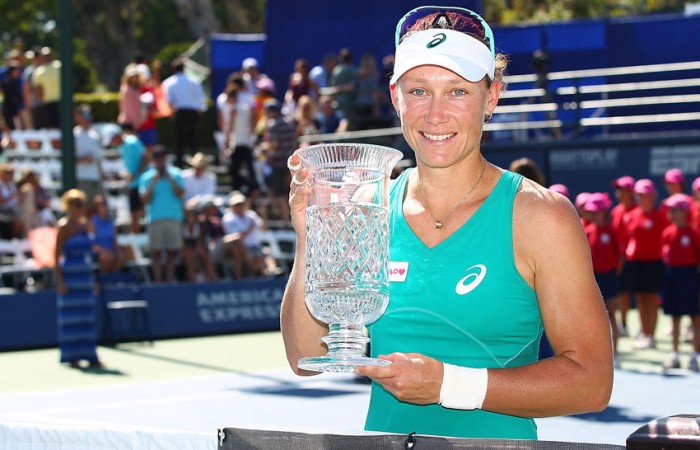 Sam Stosur has turned her season around at the right time by claiming the WTA title in Carlsbad, California with a stunning victory over Victoria Azarenka in the final.

The Australian’s 6-2 6-3 triumph on Sunday was her first win over two-time Australian Open champion Azarenka in nine meetings and provided her first singles title since her 2011 US Open final victory over Serena Williams.

After a muddling season, Stosur only entered the tournament on a wildcard after getting beaten in her first match at last week’s Stanford event when she began her US hardcourt campaign.

But the 29-year-old from the Gold Coast now boasts impressive wins over world No.4 Agnieska Radwanska and world No.3 Azarenka in the space of a week as well as the confidence from a fourth career title as she prepares for another tilt at the US Open starting in three weeks.

“It’s been a little bit up and down,” said Stosur of her on-court fortunes since her US Open win two years ago.

“This year has certainly been a little tough. I’m very, very happy now to get another win and hopefully that can mean some good things in the future.

“Stanford didn’t quite go to plan, and I took a last minute wild card that obviously, now I’m super-grateful for.”

The success is expected to lift her ranking from No.13 to No.11 this week.

Stosur blazed 20 winners against Azarenka while the out-of sorts top seed made her task much easier by making 29 unforced errors.

Another significant statistic was break point chances, with Stosur saving 11 of 12 on her own serve and converting on four of five on the Belarusian’s serve.

Azarenka was playing her first tournament since withdrawing from the second round of Wimbledon with a right knee injury; she will rise a spot to No.2 on Monday’s rankings after making the final.