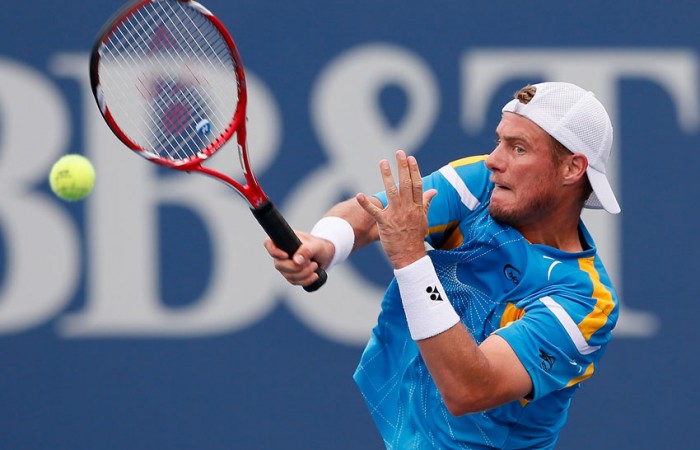 Isner, a two-time Atlanta runner-up seeking his seventh career ATP crown, will play for the title of the $US546,930 hardcourt event on Sunday against the winner of the other semifinal between fellow American Ryan Harrison and South African second seed Kevin Anderson.

Former world No.1 Hewitt, who lost the Newport final two weeks ago to Frenchman Nicolas Mahut, was a narrow loser in his first tour hardcourt semifinal since 2009.

Hewitt had rallied from one set down to win their two prior meetings, this past March in the second round at Indian Wells and earlier this month in a Newport semifinal.

In the third set, Isner went down triple break point in the seventh game but rescued them all with service winners and held.

Hewitt forced another break point in the ninth game but Isner saved it with a serve and volley winner and held for a 5-4 edge on the way to the tie-break.

Isner, with the ATP’s most tiebreak wins this year at 23-6 and wins in both prior tiebreaks against Hewitt, opened with a 140-mph (225kph) ace and ripped a forehand winner for a 2-0 lead.

Hewitt fell and Isner hit an easy backhand for a 3-0 advantage before the Aussie, who entered 5-5 in tiebreaks this year, swatted a cross-court forehand winner but then netted a forehand to hand Isner a 4-1 lead.

Hewitt fought back to level at 4-4 when Isner netted a backhand volley. The American answered with his final ace only to have Hewitt respond with a forehand volley winner for 5-5.

Isner reached match point with a backhand volley winner and hit a service winner to take the victory after two hours and 23 minutes.

Isner fired 10 aces in the first set, twice as many as Hewitt, and made only two double faults.

Isner took the only break of the first set in its final point, capturing the 10th game on back-to-back forehand winners.

Hewitt flipped a forehand winner past Isner, after the 28-year-old American came to the net, to win his first break-point chance of the match and seize a 2-1 lead in the set two.

But Hewitt, who notched 12 aces in the match, double faulted on break point in the next game to pull Isner back level in the set, although Hewitt broke back to lead 4-3 and held twice to force a third set.