What’s luck got to do with it?

To many, Steven Bradbury’s name is synonymous with luck. So much so that the phrase “Done a Bradbury” is in the Australian Slang Dictionary. 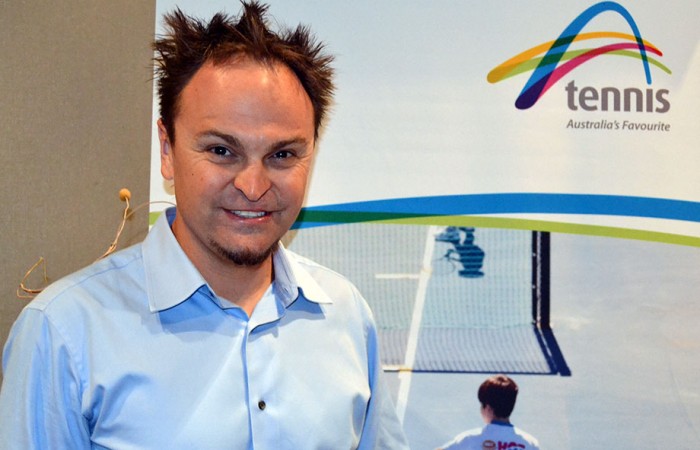 To many, Steven Bradbury’s name is synonymous with luck. So much so that the phrase “Done a Bradbury” is in the Australian Slang Dictionary.

But despite the initial perception after watching “that race”, when listening to Bradburys’ incredible life story, “luck” is the last word that comes to mind.

“My biggest asset was that I was prepared to work my guts out for as long as it took, every day. I trained harder than possibly anyone in the sport, that was the strength that I had,” said Bradbury who spoke exclusively to tennis.com.au following his presentation at last week’s Community Tennis Officer conference.

Bradbury was invited to speak at the conference where 60 of the state-based Community Tennis Officers gathered for three days of professional development based around communication skills.

While most people know about or have watched “that race”, Bradbury’s story is much longer than the most famous 90 seconds of his 12-year, four Winter Olympics professional speed skating career.

A world champion in 1991, Bradbury was the favourite heading into the 1994 Winter Olympics in Lillehammer. In the semis Bradbury was knocked over and missed the final. There was some consolation, however, in that Bradbury was part of the men’s 5000 metre relay team that won bronze – Australia’s first Winter Olympics medal since entering the winter Games 66 years earlier.

While competing in a 5000-metre short course speed skating event in Canada in 1998, the Australian was struck in the thigh by a rival skater’s skate. Bradbury lost four of his body’s six litres of blood in 60 seconds and almost his life. The injury required more than 100 stitches and months of physiotherapy in the lead-up to the 1998 Olympics.

In Nagano, two days before his event, Bradbury was struck down with food poisoning. He failed to make it past the heats.

In 2000, just 18 months out from the Salt Lake City Olympic Games, Bradbury broke his neck in a training accident and spent the next two months in a halo brace. It was during this time that he began to question his motivation to compete.

Realising that he was getting older and no longer one of the pre-race favourites, Bradbury’s goal changed from winning Gold to simply performing his best at the Olympics.

And he did just that in the 2002 Salt Lake City quarterfinals. Pitted against event favourite Apolo Anton Ohno and defending world champion Marc Gagnon, Bradbury finished second to secure his spot in the semifinals where he also finished second.

Lining up in the final, Bradbury was not favoured to win, so he decided to stick with his strategy from the semifinals – keep out of the way of the other racers and hope for a collision.

What happened next has been replayed thousands of times – a crash that took out the other four finalists on the final turn allowed Bradbury to coast to the finish line and the Southern Hemisphere’s first ever Winter Olympic gold medal.

But while some saw the victory as a gift, the years Bradbury spent training were anything but. As a teenager Bradbury made a sign that read “This is the Olympics, get up!” and stuck it above his bed so it would be the first thing he saw each morning.

Bradbury’s training regime consisted of 12 gruelling sessions per week – two and a half hours in the morning and afternoon, six days per week. On top of this, Bradbury’s father John, himself a national speed skating champion in the 1960s, encouraged his son to run with him most days. The young Bradbury wasn’t a fan of pounding the pavement but later realised it was these extra fitness sessions that helped him complete four races in a two-hour period on his way to Gold.

More than 10 years since that famous win, Bradbury now splits his time between RBC Sport, a custom-made cycling and speed skating shoe company that Bradbury started with a friend in the late 1990s, his three children and motivational speaking.

At Salt Lake City, athletes wearing boots made by RBC would win three gold, three silver and two bronze medals. Bradbury no longer assists with making boots personally, partly because he’s so in demand as a public speaker.

“It’s [motivational speaking] something that I fell into at the beginning,” explains Bradbury. “I never imagined that it would actually turn into a career.”

Since first telling his incredible story shortly after winning Gold in Salt Lake City, Bradbury has inspired thousands with his tale of perseverance and determination.

It’s a big departure from Bradbury’s former life as a professional speed skater, one that he is still adjusting to in some ways.

“If I choose not to answer my emails or run my business on one particular day, is there a consequence? Yeah [there is], but I can do it the next day and it’s still OK. Whereas in sport if you miss a day’s training, you know the people that you’re racing against aren’t missing a day’s training, so they’ve got one up over you and that’s the driver to never miss a day. And being able to put that into my everyday mindset now for me is a challenge.”

And does the oft-repeated phrase “Doing a Bradbury” bother him?

“Most people realise that you don’t wind up on the world stage in anything unless you’ve done a hell of a lot of hard work to get there … and I did it for a long, long time.

“People understand that there’s a reward for effort and for me it may have come eight years earlier when I was the favourite but it didn’t and I stuck it out and maybe there’s a little bit of karma in that.

“I’d had my share of bad luck in previous Olympics and things turned for me in the end. The saying ‘Doing a Bradbury’ certainly has the luck angle to it with the unlikely victory, the underdog getting up, but I think all that’s very Australian as well and every time it’s used I love it and I hope they’re still using it when I’m dead.”