UPDATE: Sam Stosur has suffered a shock straight-sets loss in the opening match of her US hardcourt campaign at the Bank of the West Classic in Stanford. 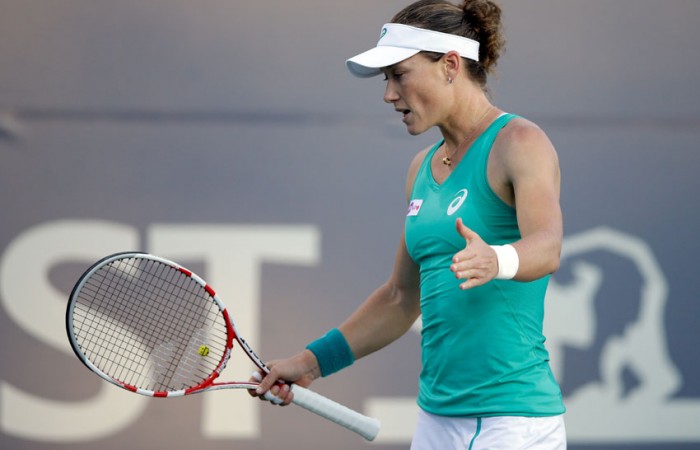 Sam Stosur has suffered a shock straight-sets loss in the opening match of her US hardcourt campaign at the Bank of the West Classic in Stanford, California.

The second seed went down 6-2 6-4 to world No.83 Olga Govortsova of Belarus in the second round clash on Tuesday, after having enjoyed a bye in the first round.

The defeat is a huge blow for the Australian, with barely a month left before the US Open – the title she won back in 2011.

Stosur’s serve, normally such a weapon, was her undoing on Tuesday night.

She struggled to land her first serve, won just 27 per cent of points on her second, and committed an unsightly 10 double faults.

“That didn’t set a good tone for the match,” Stosur said. “It is inexcusable to get that many in one match.

“She (Govortsova) was playing quite well and I wasn’t able to combat what she was able to do.

“Things were slowly turning around, and I had a break (point) to go 5-5. I gave myself a chance to get back into the match but I had to win that last game.”

It gave Govortsova plenty of break point chances – 11 in all – of which she gladly took advantage, breaking the world No.13 four times to secure a berth in the quarterfinals.

There, the Belarusian will face the winner of the second-round match between No.5 seed Sorana Cirstea and American Coco Vandeweghe.