Australians Nick Kyrgios and Thanasi Kokkinakis have claimed the Wimbledon boys' doubles title with a straight-set victory on Sunday at the All England Club. 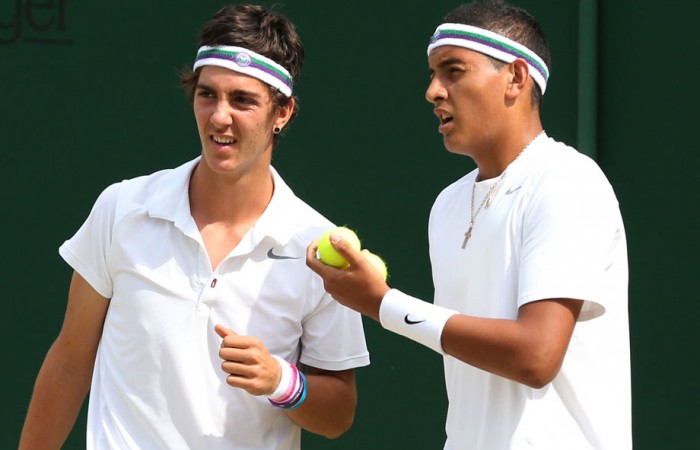 Australians Nick Kyrgios and Thanasi Kokkinakis have claimed the Wimbledon boys’ doubles title with a straight-set victory on Sunday at the All England Club.

The Aussies were superior in every department in the title match, serving strongly, beating the French-Italian combo with greater weight of shot, and showing remarkable aptitude at net.

“We’re both pretty tall, so serving’s the key for us in doubles,” Kyrgios said.

“We’ve got pretty good hands and returns as well. If our heads are in the right space on the day, we can play some serious doubles out there and I thought today we did that … we’ve got good support around us and we’re good friends, so we’re never going to get angry at each other.”

Indeed, the Australians combined superbly, with Kokkinakis volleying a winner in the sixth game to hand them the first break of the match for 4-2.

They held onto that advantage to pocket the opening set – breaking again in the eighth game after each threaded a passing shot winner on consecutive points to reach set point – and broke again in the fourth game of the second set, when Kyrgios smashed an overhead winner.

A few games later, they found themselves serving for the match, and Kyrgios made no mistake, smacking a pair of aces on the last two points of the match to clinch the title.

“It’s obviously a once in a lifetime experience playing at Wimbledon and to be in a final of any tournament is a great opportunity to go out there and win it,” Kyrgios said.

“I thought we came out with great energy at the start – we were really positive to each other. We knew if we played our best doubles, serving well, volleying well, being aggressive and coming in … I thought we did that well today, and the result showed.”

For Kyrgios, who will focus on play at senior-level events, Wimbledon marked his last junior tournament. And what a way to bow out of the junior ranks.

“I wanted to sort of going out on a high,” he revealed.

“Winning doubles at Wimbledon is something I’m probably never going to forget.”