Kokkinakis and Kyrgios in fine form

Australian Open finalists Nick Kyrgios and Thanasi Kokkinakis are both through to the third round of the Wimbledon boys’ singles championships. 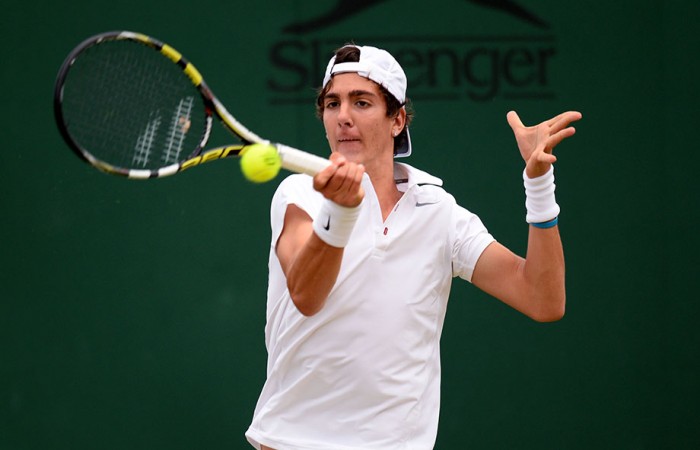 Australian Open finalists Nick Kyrgios and Thanasi Kokkinakis are both through to the third round of the Wimbledon boys’ singles championships.

Kyrgios continued his good form from day one as he swept aside Lucas Miedler in straight sets, 6-2 6-4.

“It’s obviously a great experience to be part of this tournament,” said Kyrgios.”

“It’s good to be back at England again, playing Wimbledon – it’s one of the best tournaments you could ever play.”

The world No.1 junior, Kyrgios is more than aware of the expectation that comes with being the top seed.

“Obviously there’s a lot of expectation, but I’m enjoying every time I step out there.”

“Pat Cash has always been a really good mentor for me, he took our Junior Davis Cup team away to Mexico and ever since then he’s kept messaging me and kept giving me really good advice.”

Kokkinakis joins Kyrgios in the third round following a hard-fought second-round victory over Sweden’s Daniel Windahl, 7-6(6) 7-5.

Unfortunately for Brad Mousley, his tournament came to an end at the hands of France’s Enzo Couacaud, 6-2 6-2.

Up next for Kyrgios is Hyeon Chung, while Kokkinakis will face the winner out of Karen Khachanov and fourth seed Laslo Djere.