Kyrgios blasts his way into second round

Nick Kyrgios has pencilled his name in the second round of the boys’ singles championships at Wimbledon with a solid straight-sets victory. 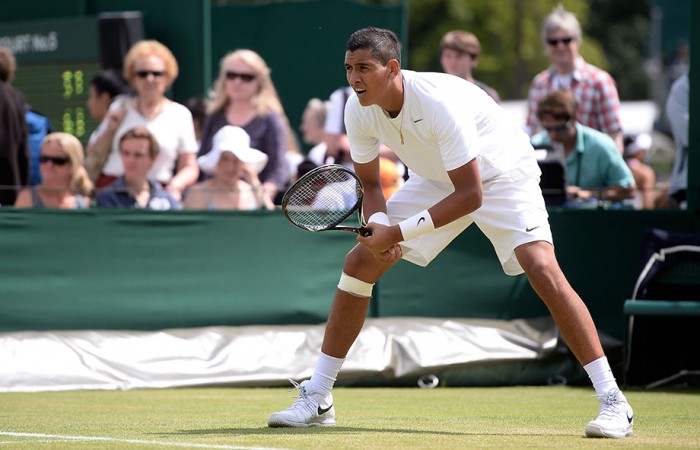 Nick Kyrgios has pencilled his name in the second round of the boys’ singles championships at Wimbledon with a solid straight-sets victory.

Playing local hope Evan Hoyt, Kyrgios was simply too strong as he used his serve and forehand to full effect in a 6-4 6-3 win.

Hoyt fought hard to stay with the Australian but he simply couldn’t match Kyrgios’s formidable serve.

Playing in what will be his final junior event before focusing on transitioning to the men’s tour, Kyrgios spoke about his desire to finish his junior career on top.

“There’s a lot of expectation being the No.1 seed again. This will be the last junior tournament I ever play in my life, so I want to go out on a pretty good memory.

“I’ve just got five more days of pretty hard work, knuckling down and hopefully I’ll be on Court 1 on Saturday.”

Not that he’s looked too far ahead in the draw.

“It’s just a process, you can’t really think forward, you’ve just got to focus every match because there’s a lot of good players in juniors.”

Sadly for Harry Bourchier, and qualifiers Jay Andrijic and Lizette Cabrera, their tournament has come to an end in the first round. Bourchier was ousted by Great Britain’s Julian Cash 6-4 6-2, while Andrijic was defeated 6-4 6-4 by unseeded Japanese 17-year-old Yoshihito Nishioka, and Cabrera fell to Turkish 16th seed Ipek Soylu, 6-3 6-4.

Next up for Kyrgios will be Austria’s Lucas Miedler, Kokkinakis will face Sweden’s Daniel Windahl and Mousley will meet France’s Enzo Couacaud who upset 15th seed Frederico Ferreira.