Tomic through to fourth round

Bernard Tomic outfoxed ninth-seeded Frenchman Richard Gasquet on Saturday in another impressive display to reach the fourth round at Wimbledon. 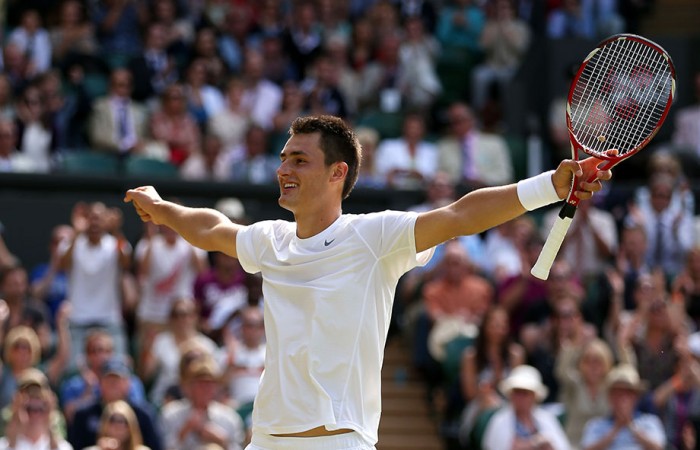 Bernard Tomic outfoxed ninth-seeded Frenchman Richard Gasquet on Saturday in another impressive display to reach the fourth round at Wimbledon.

The Australian world No.59 progressed to the last 16 at Wimbledon for the second time and he will face  seventh-seeded Czech Tomas Berdych who defeated South African Kevin Anderson in four sets.

Another win would likely set up quarterfinal showdown with top seed Novak Djokovic, the player who beat him in the 2011 quarterfinals at the All England Club.

Tomic seemed to lap up the big stage first-up on Wimbledon’s Centre Court and some 15,000 supporters were treated to an entertaining match as Tomic was forced to test his full range of skills against the crafty Frenchman.

In stark contrast to his opening encounters against big-hitting Americans Sam Querrey and James Blake, this was more an exercise in tactics and touch.

Neither player broke serve in a high-quality first set, with Tomic digging himself out of several service holes to send the set to a tiebreaker.

He edged it with a remarkable forehand drop shot to take a one-set lead.

Tomic was millimetres from taking the second set.

Up 5-4, Tomic had Gasquet 0-40 on serve and the Australian missed several passing shot opportunities.

After saving four set points, the Frenchman made him pay, breaking serve in the next game and serving out the set.

The same opportunity presented itself to Tomic in the third set but this time he didn’t let it slip, converting a second set point opportunity with a great forehand retrieval.

Tomic was sublime in the fourth-set tiebreaker, converting his third match point with a big serve and celebrating with his arms outstretched.

“I was very nervous but I couldn’t ask any more of myself.

“I’m happy with the way I’m going and hopefully I can keep it up.”

The victory snapped an 11-match losing streak against top 10 players on the tour.

*Note: there is no play on Sunday 30 June