Sam Stosur’s Wimbledon campaign has come to an end in three sets at the hands of powerful 23rd seed Sabine Lisicki. 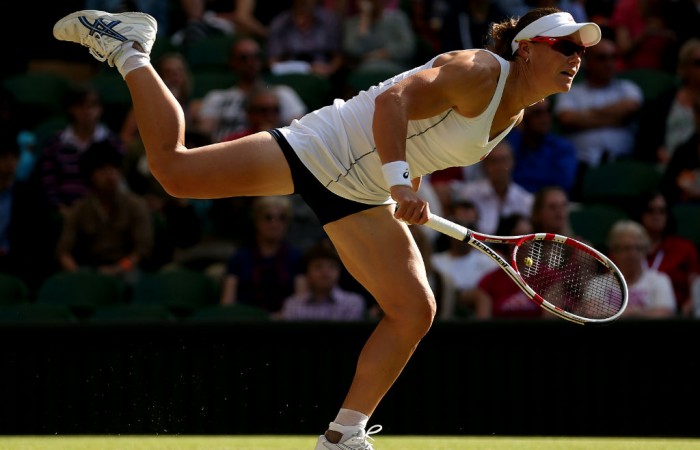 Sam Stosur’s Wimbledon campaign has come to an end in three sets at the hands of powerful 23rd seed Sabine Lisicki.

The Aussie No.14 seed clinched the first set but faded as the match wore on, falling 4-6 6-2 6-1 late in the afternoon on Centre Court.

Lisicki moves through to a probable showdown with top seed Serena Williams in the last 16.

“I would have loved an opportunity to play in the fourth round. At least today, again, I have to be happy with the way I played overall,” Stosur reflected.

“There were a couple points here and there in that match and maybe it’s a different story. I know 6-2 6-1 doesn’t look that close, but I think a lot of those games were.

“So as disappointing as it is, I have to say this is probably the best I’ve felt walking away from Wimbledon.”

Stosur looked in great touch in the opening set, hitting her spots with the serve and thumping her forehand to keep Lisicki off balance, and benefitting from the German’s errors.

“I played a great first set.  Couldn’t have been happier with the way that set went,” she said.

But as Lisicki found the range on her own powerful serve and groundstrokes, she began to make headway in the match.

“When you’re playing someone like her, she’s trying to do the exact same back at you with probably a bit more firepower.  I hit the ball pretty hard, and she almost takes it that next step,” Stosur observed.

“A couple times for sure she comes at you and almost the only thing you should do or can do is really try and go straight back at her. It’s hard when it’s coming that fast sometimes.”

Stosur began misfiring, possibly the result of the pressure the German was placing on her game as much as her own level dipping.

Despite Lisicki requiring treatment for a cut on her finger late in the second set, she returned to court and promptly served out the set to level the match.

And she began the third in the best possible style, breaking Stosur’s serve and fending off several break points to move ahead 3-0.

Although the Australian got on the board at 3-1, it was the last impact she’d make – Lisicki’s winners and Stosur’s copious errors combined to hand the German victory in one hour and 40 minutes.

“It’s been good,” Stosur said of her 11th visit to the All England Club.

“Again, it’s not the round where I would have liked to have got to, but I have to be happy with the way I played. It’s certainly a huge improvement.

*Note: there is no play on Sunday 30 June