With the Wimbledon draws hit by a number of high-profile upsets and withdrawals in the first two rounds, we take a look at the 10 most shocking.

Day 3 at Wimbledon marked one of the most extraordinary days of Grand Slam tennis in history, with a slew of injuries and upsets seeing some of the biggest names in men’s and women’s tennis exiting the draws.

Now known as “Wacky Wednesday” or “Wimble-weird”, it was still by no means the only day on which a top contender has been eliminated from the draw at The Championships in 2013.

This Friday, we look at the 10 most notable exits.

Although the diminutive Italian has never been a huge fan of the grass, her exit on the opening day of the tournament left that section of the women’s draw wide open. The No.5 seed, a French Open finalist, US Open semifinalist and Australian Open quarterfinalist, was ousted by the little-known yet promising Monica Puig of Puerto Rico, who has since gone on to the third round. 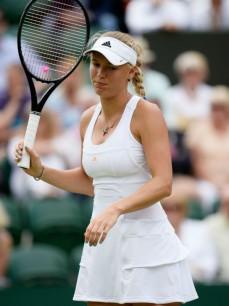 She may not be the force she was when she was No.1 18 months ago, but falling in the second round of a Grand Slam event still counts as an upset for Caroline Wozniacki, especially in the manner she lost on Day 3 at Wimbledon – a 6-2 6-2 defeat to qualifier Petra Cetkovska. Although an ankle injury may have hampered her, there’s little doubt Wozniacki is mired in a worrying slump. She’s only once passed the fourth round at a major since 2011.

The Canadian’s form has plateaued of late, and that trend has continued at Wimbledon. The 17th seed fell in straight sets on Thursday to Igor Sijsling of the Netherlands, the second-round defeat his earliest in the past four Grand Slams (he also fell in the second round at the All England Club in 2012).

The flamboyant Serb had recently been rounding into some form of late, winning 20 of her past 27 matches and rising from world No.24 to No.14 since March. But that form counted for little on Court No.1 on Wacky Wednesday, when she was knocked out by her 97th-ranked compatriot Vesna Dolonc. The loss continued a trend of underwhelming performances at the All England Club for Jankovic, who since 2010 has failed to advance beyond the second round.

Another Serb, Ana Ivanovic, looked in fairly sharp form when she brushed aside Virginie Razzano 7-6(1) 6-0 in round one. But she came unstuck against 19-year-old Eugenie Bouchard, who last year won the junior title at Wimbledon. But instead of the youngster being overwhelmed by the occasion on Centre Court on Wednesday, it was the No.12 seed – Ivanovic was sent packing 6-3 6-3.

A semifinalist the past two-years at Wimbledon, Jo-Willy looked set for a repeat performance when he cruised through his first round match and led the dangerous Ernests Gulbis by a set. But problems with a left knee tendon began to surface in the second set, and the Frenchman was only able to continue for another set-and-a-half before tragically pulling the pin on his 2013 campaign.

Another player whose campaign ended in injury, Victoria Azarenka wasn’t even able to take to the court on Wednesday for her second round match against Flavia Pennetta. The second seed, considered one of the favourites to reach the final, slipped horribly in her opening match and badly jarred her knee. Although she was able to hobble to victory, a practice session on Wednesday morning confirmed she was in no condition to continue in the tournament. “I couldn’t be more disappointed,” a dejected Azarenka told the press.

Azarenka’s main rival in the bottom half of the draw and projected semifinal opponent, Maria Sharapova was another high-profile casualty on Wednesday. Playing former-teen-prodigy-turned-qualifier Michelle Larcher de Brito, Sharapova was flat from the outset and bullied around the court by her less-heralded opponent. It didn’t help that Sharapova slipped a couple of times herself, and not long after the most serious of her tumbles – which required a visit from the trainer – she was bundled out in straight sets.

Having just won the French Open – his seventh title of nine tournaments contested in 2013 – Rafael Nadal was a hot favourite coming into Wimbledon. But his infamous knees, and an inspired opponent in Steve Darcis, conspired to create one of the biggest first round upsets in Grand Slam history. Nadal and coach Uncle Toni only half-denied his knees were causing him trouble, and for a second straight year, the Spaniard made an earlier-than-expected exit from The Championships.

Of all of the madness that characterised Wednesday at Wimbledon, it was hard to top the spectacular defeat of the great Roger Federer on Centre Court. Expected to restore some order to the decimated playing schedule, Federer instead found himself ousted by a game, net-rushing Sergiy Stakhovsky, ranked a lowly No.116. Federer’s four-set loss ended his stunning streak of 36 straight Grand Slam quarterfinals, and marked his earliest exit at Wimbledon in 11 years.