Australia's remaining hopes in the men's and women's singles are both in action on Thursday. 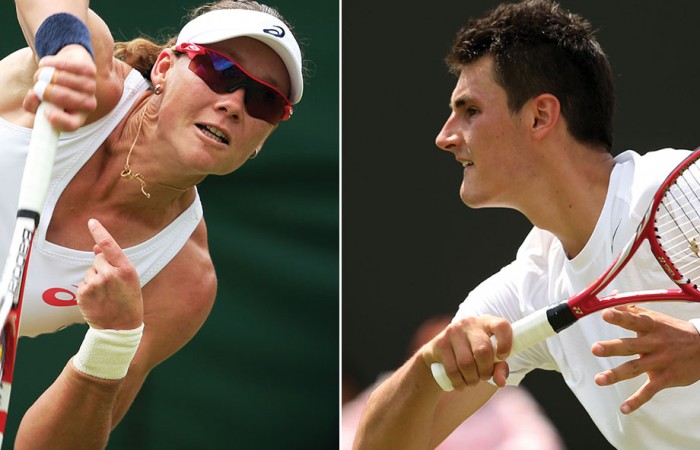 At her 11th attempt, Samantha Stosur is finally starting to feel at ease on the grass courts of Wimbledon.

The All England Club has often been a stressful place for Australia’s top-ranked tennis player, who has reached the third round only once (2009).

But the 14th seed spoke of feeling a new clarity on grass after opening her campaign with an impressive 6-1 6-3 win over Slovakian teen Anna Schmiedlova.

Stosur considered it one of her best performances on her least-favoured surface and she gets another opportunity to build momentum against Russian world No.86 Olga Puchkova on Thursday.

“Overall I feel probably a little bit more clarity when I’m out on the court,” Stosur said.

“I obviously don’t know what that’s going to equate to but hopefully it’s going to mean a decent tournament for me because I do feel like I’ve been playing a lot more confidently on the grass this time around.

“It’s probably a point where I’ve been trying to get to for a long time.

“I don’t know why. For whatever reason this year it feels a little bit better.”

Stosur knew virtually nothing about Schmiedlova coming into the tournament and she also has little idea of what to expect from Puchkova.

The pair has met once before, with Stosur winning in straight sets on a hard court in Miami six years ago, but the match clearly hasn’t stuck in the Australian’s mind.

“I think we practised maybe one warm-up or something at the Australian Open. I don’t know that much,” Stosur said.

“I know she hits the ball pretty hard and flat.

“On this surface, I’ve got to definitely be ready to be down low and preparing early for each shot.”

Tomic, 20, called a doctor in the fourth set complaining of dizziness and poor vision but later attributed the problem to simply under-eating at breakfast.

The 2011 Wimbledon quarterfinalist on Thursday meets another American in James Blake, a player 13 years his senior.

The pair has never met but Tomic is particularly confident after ousting Querrey.

“He [Blake] is going to be very difficult to play but he doesn’t serve as good as Sam,” Tomic said.