Brown stuns Hewitt in second round

UPDATE 1:55am: Lleyton Hewitt's Wimbledon campaign ended with a shock loss to flamboyant German qualifier Dustin Brown in the second round. 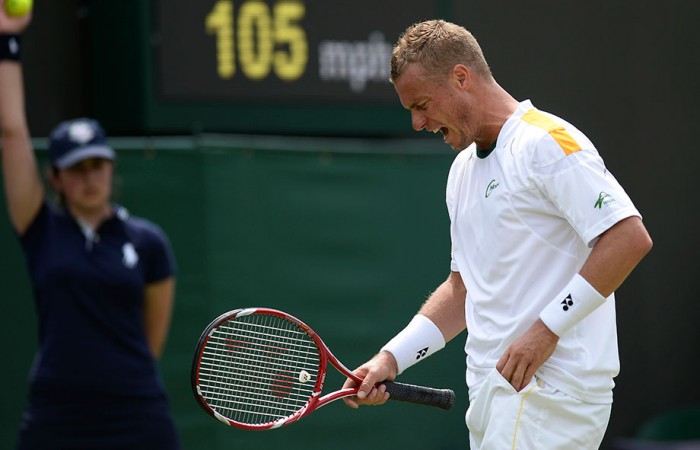 The 32-year-old Australian blew his chance to capitalise on a wide-open draw as he followed up his first-round upset win over 11th seed Stanislas Wawrinka with a 6-4 6-4 6-7(3) 6-2 loss to 189th-ranked Brown.

The defeat leaves Bernard Tomic as the only Australian left in the men’s singles draw.

Journeyman Brown, a 28-year-old who spent five years driving around Europe in a campervan trying to establish his career, delivered the performance of his life as he reached the third round of a grand slam for the first time.

Sporting long, dreadlocked hair, the German – who changed his nationality from Jamaican in 2010 – played an entertaining, high-risk game with his big serve, booming forehand and freakish half-volleys denying Hewitt a chance to build any rhythm.

“You have to concentrate on your game, block that out as much as possible. You lose your rhythm a bit out there.

“Then I started pushing on my serve a little bit too much to try to get a cheap point. I just lost my way a little bit.”

Australian tennis great John Newcombe described the loss as a “body blow” for the veteran, while Todd Woodbridge said it would prompt the world No.70 to think seriously about playing on.

Hewitt was coy when asked about his future but could not guarantee he would return for a 16th campaign at the All England Club, where his is the 2002 champion.

“At the moment I’m just disappointed. Have to see where we go.”

The pain of Hewitt’s loss was compounded by the fact the draw had opened up further for him to make a run deep into the tournament.

After struggling early, Hewitt looked to finally be grinding his opponent down before Brown broke serve at 5-4 to steal the set, celebrating wildly with his arms raised.

The Australian tried to pump himself up after breaking serve in the opening game of the second set but Brown hit back soon after and a poor service game from Hewitt allowed the qualifier to go two sets up.

Hewitt won six straight points in in the third tie-breaking, extending the match to a fourth set.

But Brown quickly wrestled the momentum back, breaking twice in the final set en-route to an emotional victory.

“Just happy and emotional and everything … I’m playing Lleyton Hewitt, a guy that you’re watching when you’re growing up.

“It’s just been a very long way. Just happy that I actually got through the match.”