Perfect start for Stosur at Wimbledon

UPDATE 11:35pm: Sam Stosur has gotten her Wimbledon campaign off to the ideal start on Tuesday, breezing past Anna Schmiedlova in straight sets. 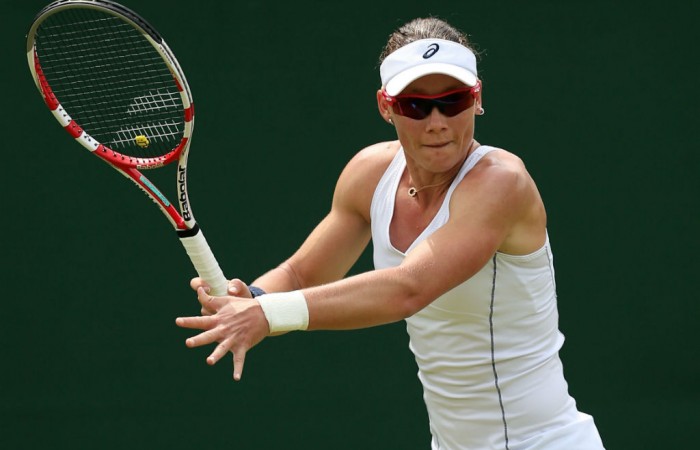 Sam Stosur blasted her way into the second round at Wimbledon with a dominant win over Slovakian teenager Anna Schmiedlova on Tuesday.

The 14th seed made an ideal start to her 11th straight Wimbledon campaign, needing little more than an hour to secure a 6-1 6-3 win.

Stosur has set up a second-round clash with Russian Olga Puchkova.

The 29-year-old Australian is targeting a breakthrough result at the All England Club, having never made it past the third round.

While her best results have come on clay and hard courts, Stosur looked every bit the grasscourt player on Tuesday.

Lucky loser Schmiedlova, ranked 119th, lost in qualifying but earned a spot in the main draw because of a withdrawal.

But her reward was a daunting opening encounter against Stosur, the highest-ranked player she’s faced.

Despite serving and striking the ball well, the 18-year-old was blown off the court as Stosur blended ferocious power with deft touch to wrap up the first set in 27 minutes.

Stosur wasn’t quite as clinical in the second set but she wrapped up a professional performance with minimal fuss.

“I was really pleased with the way I played,” she reflected after the match.

“I thought I came out and started really well to get that break of serve. Then I thought I served well throughout the whole match.

“Even those few service games where I got down 0-30 or kind of lost that first point, I didn’t let that roll on to be a bad game in the end.

“So overall, really pleased. I feel pretty good going into the next round.”

Stosur knew little about her opponent heading into the match and said it would be a similar case against 86th-ranked Puchkova.

“I don’t know that much,” Stosur said.

“I know she hits the ball pretty hard and flat. On this surface I’ve got to definitely be ready to be down low and preparing early for each shot.”