Lleyton Hewitt made a scintillating start to his 15th consecutive Wimbledon campaign with a straight-sets upset win over Swiss 11th seed Stanislas Wawrinka on Monday. 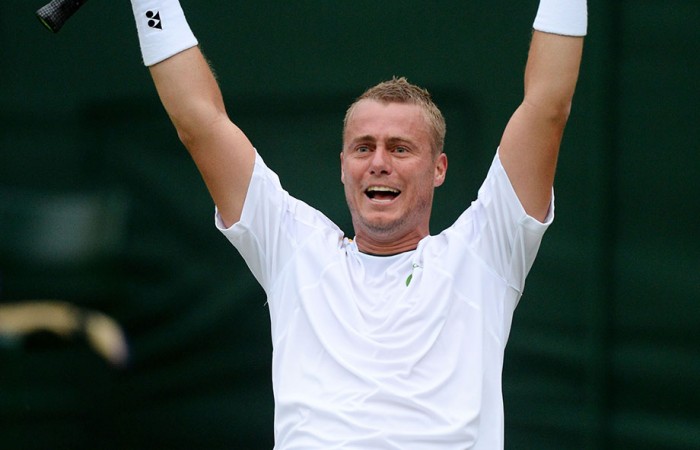 Lleyton Hewitt made a scintillating start to his 15th consecutive Wimbledon campaign with a straight-sets upset win over Swiss 11th seed Stanislas Wawrinka on Monday.

It was the only Australian victory in singles on the opening day after Marinko Matosevic and Matt Reid lost their first-round matches.

And he’ll be eyeing off a run deep into the draw, particularly after potential fourth-round opponent Rafael Nadal suffered a shock loss to Steve Darcis just moments earlier on Court One.

Buoyed be his surprise run to the Queen’s Club semifinals, Hewitt said he didn’t feel like the underdog against Wawrinka, who’d been defeated by the eventual champions in both of this year’s Grand Slams so far.

And he didn’t look it either as he blew his opponent off the court in the early stages.

Hewitt had spent the week in training while Wawrinka arrived in London only a day before the tournament after reaching the final at ‘s-Hertogenbosch on Saturday.

And the Australian looked the sharper player as he raced to a 4-0 lead.

Wawrinka battled back but Hewitt held on to serve it out on his fourth set point when up 5-4.

It was Hewitt’s turn to stage a fightback in the second set, coming back from a break down early to take a two-sets-to-love lead.

Wawrinka’s frustration was on show as he received a warning for tossing his racquet into the ground, and Hewitt didn’t let up in the third set.

He broke serve in the first game and fought hard to hold his serve against a desperate Wawrinka, winning an epic game to go up 4-2.

In fading light, Hewitt converted his fourth match point on Wawrinka’s serve, dropping to his knees and pumping his fists in an animated celebration in front of a crowd featuring a vocal Australian contingent.

“People ask me when I’m going to retire. Why would I retire when I can play in an atmosphere like that?,” Hewitt said after the match.

“It was a great adrenaline rush.”

Australian duos came out on top on day 1 at Wimbledon with both pairs winning their matches.

Twelfth seeds Casey Dellacqua and Ash Barty were too strong for Valeria Solovyeva and Maryna Zanevska, winning 6-2 7-5. They’ll playe the winner out of Mona Barthel/Liga Dekmeijere versus Megan Moulton-Levy/Shuai Zhang.

Paul Hanley and JP Smith had to work hard for their 6-3 1-6 7-6(5) 6-4 win over Philipp Marx and Florin Mergea. The Aussie duo will next face either third seeds Alexander Peya/Bruno Soares or Eric Butorac/Andy Ram in the second round.