Professional athletes and dedicated amateurs will extend their pre-match preparation to include the right food and drink before they take to the court. 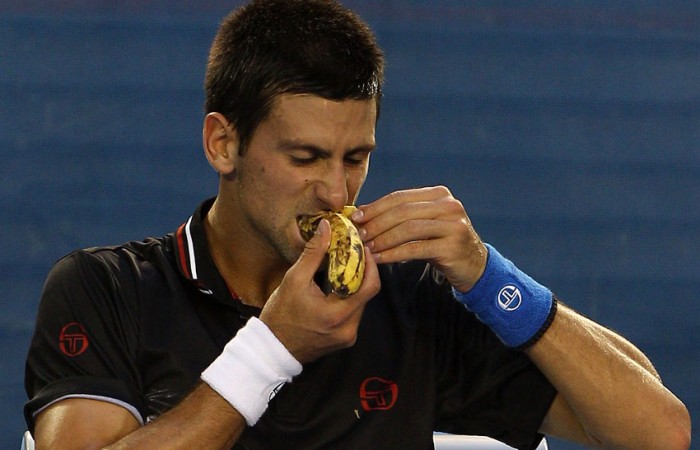 Adequate pre-match preparation will mean that you are not unnecessarily stressed by matters off the court, allowing you to focus your mind and body on the actual match.

As well as preparing their racquet bag with all of the equipment necessary to play, and researching their opponent’s strengths and weaknesses, the professional athlete and the dedicated amateur will extend their preparation to include eating and drinking sensibly, and avoiding foods or beverages which might exacerbate stress on the body.

Our diet can affect how we feel; certain foods can make us more or less anxious, typically by triggering certain chemicals in the body that influence the activity of our neurotransmitters and autonomic nervous system.

Before matches, it is best to avoid certain foods, including:

These kinds of foods can create an imbalance in blood-sugar levels, exacerbating anxiety. Too much sugar produces a condition known as hypoglycaemia, which produces symptoms very similar to those experienced in an anxiety state.

It is best to eat a healthy, balanced diet, containing vegetables, fruit and whole grains.

Likewise, it is best to avoid certain drinks before a game, particularly coffee or other drinks – like tea and some soft drinks – containing caffeine.

Caffeine blocks certain neuro-transmitters in the brain and is the most widely used mood altering drug in the world. It enhances alertness, concentration and memory and is therefore a stimulant; but too much can produce over-stimulation, especially if one is susceptible or has an already over-stimulated nervous system.

In experimental studies, caffeine has been shown to induce panic-attacks, exacerbate stress and anxiety. It stimulates the body’s secretion of insulin, which lowers blood sugar, for which the body compensates by releasing adrenalin. Caffeine withdrawal has also been shown to trigger muscle pains, irritability and anxiety.

Dr Andrew Peden is a Chartered Psychologist and Associate Fellow of the British Psychological Society and author of the book Managing Performance Anxiety in Tennis.

For more tips from the experts on how to improve your game, check out the latest edition of Australian Tennis Magazine.