Tomic falls to Simon in Eastbourne

UPDATE: Bernard Tomic has gone down to No.2 seed Gilles Simon in the quarterfinals of the AEGON International in Eastbourne. 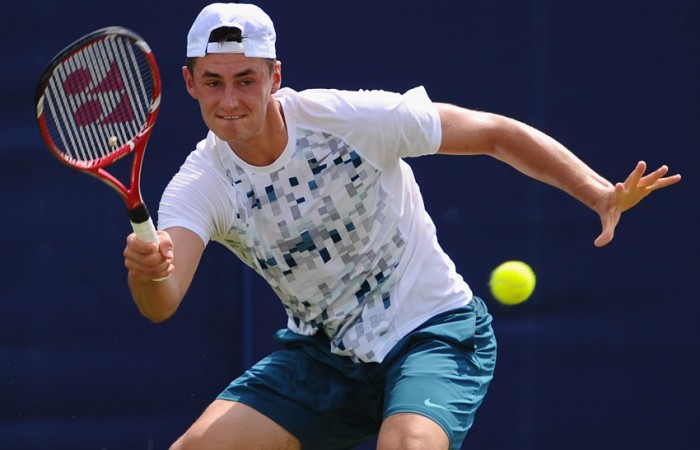 Bernard Tomic is confident of making an impact at Wimbledon despite his run at Eastbourne ending with a quarterfinal loss to second seed Gilles Simon on Thursday.

Tomic missed out on reaching a first semifinal since winning his maiden title in Sydney in January as he fell 7-6(8) 6-3 to the Frenchman.

Despite the defeat, 20-year-old Tomic said he took plenty from three tough matches and was pleased he was hampered by a troublesome hamstring injury suffered during a first-round loss at the French Open.

Tomic posted back-to-back wins for the first time since February, beating James Ward and Julien Benneteau before losing to Simon.

“I played a very difficult match yesterday and to have the opportunity to play like this, especially with my leg being okay, is very good.

“I’m happy with the form coming in to play Wimbledon so hopefully now I get a good draw. If I can get a good draw I think there’s a very good chance to do well.”

The world No.64 started brightly as he won his opening service game to love.

Neither player was seriously troubled on serve for most of the set, although a few low-flying seagulls proved a nuisance on a cool evening in the seaside town on England’s south coast.

Tomic missed a great chance to steal the set when he faced two set points up 5-4 on Simon’s serve.

The Frenchman rallied back and broke the next game but Tomic dug deep to break back send the set into a tiebreak.

The Australian fought back from 5-1 down before Simon clinched the set.

Simon was leading 4-1 in the second set when rain forced a brief delay but he needed only another 10 minutes to wrap up victory when play resumed.

“Against a good quality player, it’s important to get a match like that,” Tomic said.

“It could have gone either way, I think, in that first set.”

World No.17 Simon will face Italian seventh seed Andreas Seppi in the semifinals while Croatian Ivan Dodig meets Spain’s Feliciano Lopez on the other side of the draw.