Stosur bows out of Eastbourne

Sam Stosur's Wimbledon preparation was cut short as she fell to Czech Lucie Safarova in the second round at Eastbourne on Wednesday. 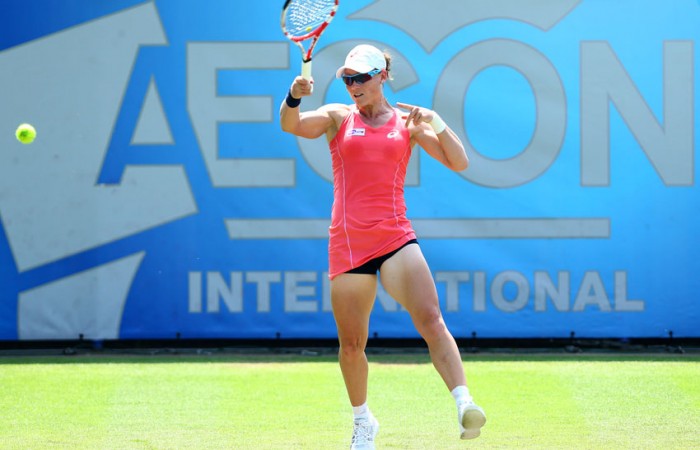 Sam Stosur’s Wimbledon preparation was cut short as she fell to Czech Lucie Safarova in the second round at Eastbourne on Wednesday.

Stosur was unable to build on an impressive opening display against Russian eighth seed Nadia Petrova, as Safarova won 7-6(5) 6-3 in warm conditions at the final Wimbledon lead-in tournament.

The 29-year-old is hoping to improve on a modest record at Wimbledon, where she has never been past the third round.

But her prospects took a significant hit on Wednesday as left-hander Safarova continued a dominant record over the Australian, with her sixth win from eight meetings.

Stosur was in control for most of the first set, and had a set point when serving for the match at 5-3 up.

However Safarova’s ball striking improved dramatically and the world No.28 rallied to take the set in the tiebreaker.

The second set was also evenly-fought, with both players battling to hold serve early, before Safarova clinched the crucial break up 4-3.

Safarova, 26, will face either American Jamie Hampton or Taiwan’s Su-Wei Hsieh in the quarterfinals.

Stosur felt missing a chance to serve out the first set was crucial but was satisfied with her performance as a pre-Wimbledon hit-out.

“Even though I lost today I still feel like I did a lot of things well,” she said.

“There’s still a few days before Wimbledon that I can still try and do a couple of things, get them a little bit better.

“I guess feeling as good as you can after losing second round but, on the whole, I feel like I’m striking the ball well and moving well which is important going to into next week.”