Lleyton Hewitt has gone down in a tense three-set semifinal at Queen's Club in a match that began on Centre Court and finished on Court No.1. 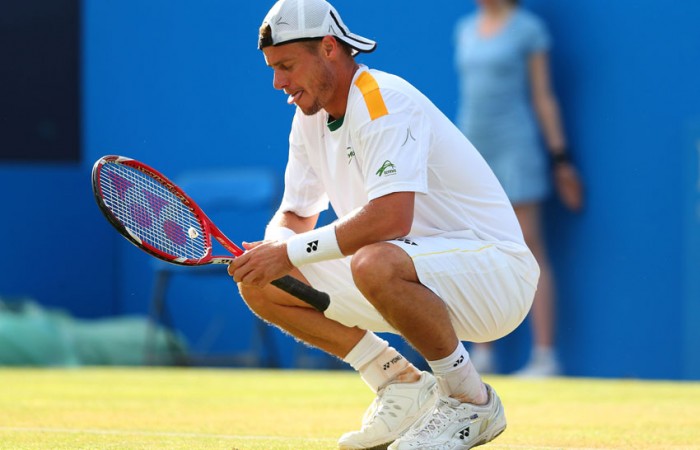 Lleyton Hewitt has blasted officials after being shafted off Centre Court during a semifinal loss to defending champion Marin Cilic at the rain-hit Queen’s Club tennis tournament.

Hewitt’s excellent run at the Wimbledon lead-up tournament came to an end in controversial circumstances in a 6-4 4-6 6-2 loss that finished on Court One on Saturday.

Hewitt’s match started on Centre Court more than two hours late due to rain and only two games were possible before more wet weather forced another lengthy delay.

With officials fretting over the possibility of not being able to complete either of the two semis they unusually decided to bump Hewitt and Cilic to Court One, allowing the crowd-pulling Murray and Tsonga clash to begin simultaneously on the main arena.

Hewitt, a four time winner at Queen’s, did not take the decision personally but described the situation as “weird” and accused officials of panicking.

The 32-year-old was unhappy organisers appeared to be responding to changing weather forecasts and felt they should have originally scheduled the matches on different courts if they were concerned about rain.

“I was disappointed, obviously,” the world No.82 said.

“To play a semifinal on a tour event, especially one like this, Court One in front of a few people is not the ideal situation that you want to play in.

“It was just really, really strange. I think the ATP guy really panicked under pressure.

“I’ve played two matches in one day, semi and final here, in the past.”

The change meant Hewitt and Cilic played on a court without HawkEye technology and could not challenge calls.

It added to the frustration as both players were angered by umpiring decisions at times.

“You’re in a semifinal, and you feel like you have a couple of rough calls and you can’t challenge.”

Despite missing a chance to win a record fifth title at Queen’s and to become the oldest winner of the tournament, Hewitt was delighted with his run, which featured wins over seeded players Juan Martin del Potro, Sam Querrey and Grigor Dimitrov.

He received treatment midway through the second set for a leg injury but said it was not a serious concern ahead of next week’s Wimbledon, where he was the 2002 champion.

Hewitt was 2-0 down in the first set when play finally resumed late on Saturday afternoon but he grew steadily into the match.

The Australian kicked ahead after calling a medical time-out midway through the second set and levelled the match before Cilic came home the stronger in the deciding set.