Having reached the third round at Queen's, Marinko Matosevic chats to tennis.com.au about returning to grass courts and the looming Wimbledon Championships. 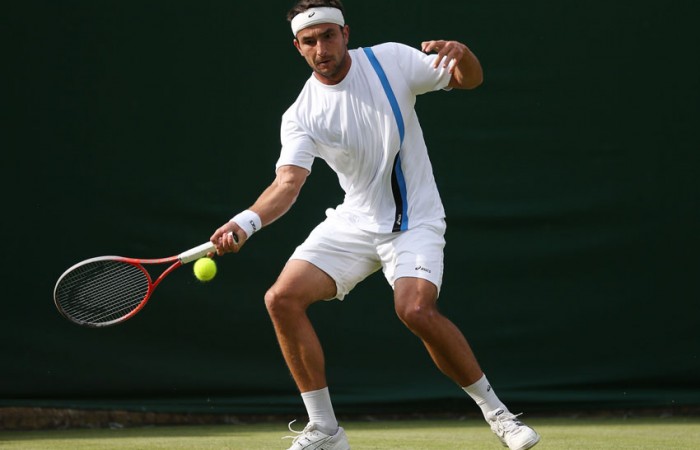 After months battling it out on European clay, Marinko Matosevic has, quite literally, headed for greener pastures.

The Aussie No.2 is through to the third round of the ATP Queen’s Club event in London, a prestigious lead-in event to Wimbledon. It’s already surpassed his best results of the claycourt swing – second round finishes in Monte Carlo and Munich – and the Victorian is pleased to be switching to a surface that suits his aggressive game.

“I enjoy playing on grass and have played many years in Australia on the surface. I like the ball coming on to me and it also helps my serve,” he explained.

That serve was on song throughout his first round victory at Queen’s over Dane Frederik Nielsen, garnering 11 aces and seeing him win almost 80 per cent of points behind his first serve.

And, after second round opponent Michael Llodra had to withdraw from their match on Wednesday, Matosevic now finds himself into the last 16, where top seed Andy Murray looms as a likely foe.

“I have to win my second round and then he’s got to win his second round but that would be pretty cool,” Matosevic said earlier in the tournament of potentially facing the world No.2.

As daunting as that prospect might be for some, Matosevic will not likely be overwhelmed. Just a fortnight ago, the Bosnian-born Aussie faced fourth seed and eventual French Open finalist David Ferrer in the first round at Roland Garros.

Playing on Court Suzanne Lenglen, the tournament’s second-biggest show court, Matosevic pushed the Spaniard all the way before eventually falling 6-4 6-3 6-4.

“I think the most important thing that I took out of the match was the way he never gives up on any point or any game. In the second set I was serving up 3-0 and 40-0, only to lose the next few games,” he reflected.

“The more I am able to play against the top players on the big courts, the easier it becomes.”

Facing the sport’s big guns is increasingly likely and regular prospect, given Matosevic’s vast improvement in the past 18 months.

Aussie tennis fans are by now familiar with this extraordinary rise; it began when Matosevic was aged 26 and languished outside the top 200 in January 2012, and continued throughout the 2012 season, which he ended inside the top 50 and recognised by his peers as the ATP’s Most Improved Player of the Year.

An attitudinal shift, sharper dedication to fitness, gelling with new coach Josh Eagle and greater belief and mental strength were all factors in his dramatic improvement, which saw him first experience success on the Challenger circuit, then in ATP qualifying, and finally at tour-level events, all in the space of just a few months.

His run continued in early 2013, with a trip to the semifinals of the ATP 500 event in Memphis in February vaulting him inside the top 40 to a career-best mark of No.39. And though he’s slightly down from that peak – he’s now ranked No.65 – there’s little doubt that Matosevic has cemented himself as a strong presence and dangerous competitor on the men’s tour.

His attention will now turn to an even bigger task – success on the Grand Slam stage.

Matosevic holds an unfortunate 0-9 record in Grand Slam main draws, something he admitted was playing on his mind following his loss to Ferrer in Paris.

But after training solidly on grass with his Aussie Davis Cup teammates in London and contesting the Nottingham Challenger on the lawns prior to Queen’s, Matosevic is doing everything in his power to be as conditioned and grooved as possible when he arrives at the All England Club.

“The atmosphere is amazing at Wimbledon and the crowd is very close to the players, so there is always a lot of excitement,” he said.

“I think every young tennis player dreams of playing at Wimbledon, so it is extremely special (to be going there).”

With a kinder draw, a win or two at SW19 would see yet another chapter written in this heart-warming story of improvement.