Futures titles for Mitchell and Feeney

Aussies Ben Mitchell and Adam Feeney have enjoyed success in Asia over the weekend, claiming ITF Futures titles in Korea and Thailand respectively. 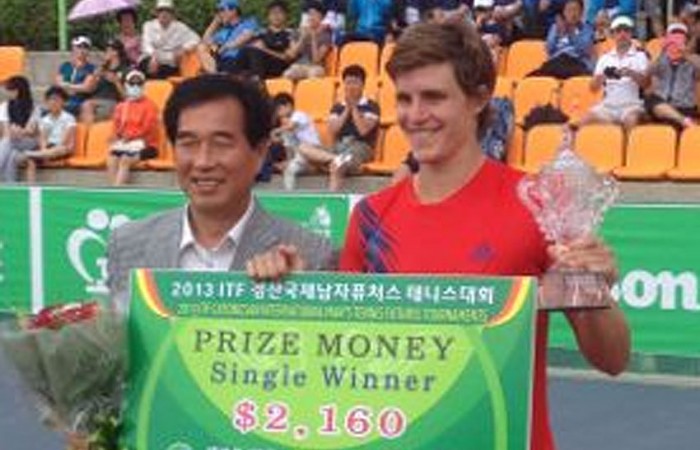 Aussies Ben Mitchell and Adam Feeney have enjoyed success in Asia over the weekend, claiming ITF Futures titles in Korea and Thailand respectively.

Mitchell continued his excellent form of late by storming to victory in Gyeongsan, Korea, dropping only one set in five matches to win his second title of 2013.

“Won a title in Korea. Very happy and relieved. Thanks everyone for the support,” he tweeted following the win.

After a somewhat tepid start to the season, Mitchell has caught fire since April; in his past five events he has won 16 of 19 matches and two titles.

He fell outside the top 400 in March but is now on the way back up, rising to No.337 following his first Futures title of the year in Thailand two weeks ago and set to vault even higher following his success in Korea.

Feeney enjoyed a similarly dominant week across in Bangkok, Thailand, cruising to the title – his fifth career Futures win and first of 2013 – for the loss of just one set.

After beating compatriot Andrew Harris 6-3 6-4 in the semifinals, the 28-year-old Feeney was in ever better form in the final, brushing aside Thai Pruchya Isarow 6-4 6-1.

Currently ranked No.290, Feeney is projected to rise withing striking distance of his career-high mark of No.248 when the new rankings are released in Monday,