Greg Polmans, currently in Budapest, Hungary for a junior tournament, documents his travels so far as part of the Tennis Australia 2000 Claycourt Tour.. 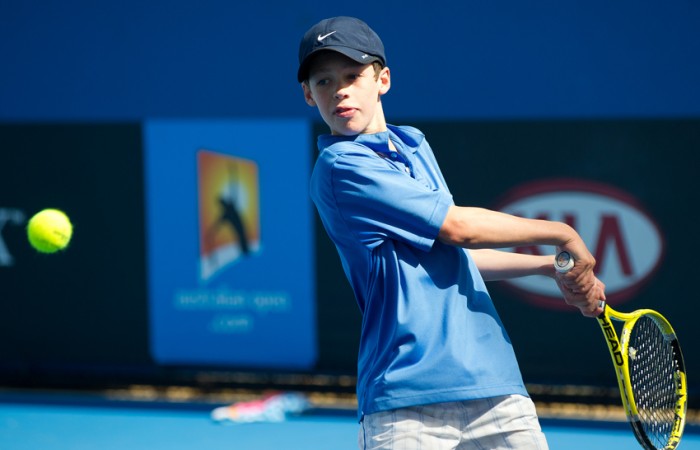 Greg Polmans of Melbourne, Victoria is travelling with the 2000 Claycourt Tour, and is currently in Budapest, Hungary this weekend for the fourth and final event of the tour. He documents his adventure so far.

When I was picked

I had packed my school bag and was ready to go school when my mum came running down the hall. She had a very big smile on her face, as she approached me, she told me that I had been picked for a European tour by Tennis Australia and that I was going to Germany, Hungary and Slovenia for the whole of May!!!!!

I was very happy and felt honoured to be part if the tour. I wasn’t able to get any details because I had to get to school. That whole day at school I was just thinking about the tour thinking who I’m going with what coaches I was going with. It felt like one of the longest days of my life because I was just looking at the clock waiting for the bell to ring so I could find out more about the tour. The bell finally went and I was first out of the class room and I SPRINTED to my locker, got my stuff and ran to my house (my house is across the road from school) as I got home I asked Mum and Dad a lot of questions about the tour so that I knew what was going on. That night I knew I had a couple of months to get to the best level I could possibly be.

We met Jamie Morgan and Daniel Buberis at the airport in Melbourne. All the other players arrived on their domestic flights and we checked in together for our international flight. Everyone was wearing their Australian tracksuit and we looked like a great team. I thought it was going to be easy to sleep on the plane but boy I WAS WRONG. It was all going well, I watched a couple of movies but when it got late and I got tired I could not fall asleep! The plane was making so much noise and I could not sleep sitting up. I only got six hours of sleep that flight. We stopped in Doha, had some food and made our way to the next flight.

The next flight was to Munich, which was a six-hour flight. That flight was actually really good!!! There weren’t many people on that plane so after we took off I moved seats to this spot where no one was. I went to the four-seater so I could lie down and sleep. I don’t know how long I slept for but it was long. So that plane flight went fast.

Training week at German base

We only arrived at the base at 3:30pm in the afternoon so we just concentrated on footwork, but it was good because it felt good to get my muscles going. We went out onto the oval for some light jogging and stretching. It was nice to get out into the fresh air and see the European base. Everything is so green and fresh. We are very lucky.

We began training at 8:30am. We all just got our feel back because we hadn’t hit a ball in two days. We also trained in the afternoon. We are practising on the clay because that is what we are playing on for the next four tournaments. We hit a lot of balls but we started to get tired late in the afternoon. After the session we had a really good stretch with Daniel our trainer and went back to the room to shower and have dinner. Dinner is at the base and there are hot meals, salad and pudding for desert!

We played some soccer and dodge ball. It was so much fun! We had another three-and-a-half hours on court working on different patterns of play on the clay and learning how to use the surface better. We have to remember that we are not playing on a hard court so we have to hit with more shape and spin and do a great job with our footwork. After that we all went to go train, once we finished Daniel took us for some exercises in the gym. In the afternoon we had a very hard session, when we finished we were all tired so Daniel took us to the pool for recovery and then let us have some fun in the pool.

This was match play day. I played Alex and Stefan and in the afternoon we played some doubles. I teamed with Stefan and we played against Alex and Rinky. At the end of the day we all went into the pool for a recovery session. We also had to do our washing and it was the first time I have done this. We dried our clothes and had to pack because we were flying tomorrow for our first tournament.

It was a rainy day so when we had all packed our bags and was ready to go we all had to run in the rain to the train station; our bags got wet and so did our clothes. At the train station there was some stairs which meant we had to push our heavy luggage up the stairs in the rain which made us all tired. We finally got on the train and could sit down and relax. The train from the base to the airport is about 45 minutes. We all met up at the airport so it was fine and we were really lucky because we didn’t get charged with excess luggage. Everyone travelled in their Australia tracksuits so we looked like an official team. When we got past all the check-ins we had to go on a bus. When we were approaching our plane were all stated laughing because it was probably the smallest plane there was in the airport. It was parked out the back like a car.

The flight was only 35 minutes long and we arrived in Graz, Austria. Three taxis picked us up and drove us to Maribor, just over the Austrian border in Slovenia and only 30 minutes from Graz.